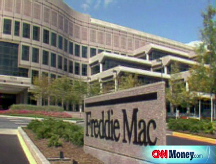 Less than three hours before the start of trading, Nasdaq and S&P futures were higher and suggesting a positive open for Wall Street.

Stocks ended Thursday's volatile session mixed amid a spike in crude prices and persistent worries about the financial sector.

A slight easing in oil prices and strengthening of the dollar helped lift sentiment ahead of Bernanke's speech.

Bernanke: The central bank chief is due to deliver the keynote address at the Fed's annual Jackson Hole symposium.

Bernanke is set to address financial stability when he gives the speech at 10 a.m. ET.

Mortgage giants: Fears that a government bailout of mortgage finance giants Fannie Mae and Freddie Mac is imminent have rattled investors and sent shares of the two firms tumbling.

Fannie (FNM, Fortune 500) shares touched a 20-year low Thursday before bouncing back, while Freddie (FRE, Fortune 500) neared an all-time low before closing off those levels.

Lehman: The Wall Street investment bank has been hit hard by worries about its ability to withstand mounting losses.

But an analyst on Thursday said Lehman (LEH, Fortune 500) could be a good takeover candidate.

Verizon-Google: Verizon Communications (VZ, Fortune 500) is close to an agreement with Google (GOOG, Fortune 500),according to a report in the Wall Street Journal. The deal would make Google the default search provider on Verizon devices, the report said.

Gap: The apparel retailer reported a 51% jump in quarterly profit after the market close Thursday. Cost-cutting efforts paid off for Gap (GPS, Fortune 500), which posted a drop in sales.

The dollar climbed against the yen and was up slightly versus the euro.