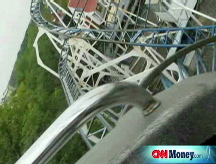 NEW YORK (CNNMoney.com) -- Stocks rallied Monday morning as investors welcomed signs that the lending market is improving and comments from Federal Reserve chief Ben Bernanke that the Congress should consider another stimulus plan.

The Dow Jones industrial average (INDU) rose over 200 points in the early going, while the Standard & Poor's 500 (SPX) index and the Nasdaq composite (COMP) also gained.

Also helping in the early going: a surprise rise in the September index of leading economic indicators.

Wall Street has been on a roller coaster ride. Last week the Dow posted its biggest ever one-day point gain as well as its second-biggest point loss ever. For the week, the blue-chip index and broader S&P 500 index ended nearly 5% higher.

The mood was upbeat overseas as investors cheered the latest moves in the worldwide effort to strengthen the banking sector. Shares in Europe and Asia advanced.

European shares rose in morning trading after the Netherlands said it would inject $13.4 billion into ING. Asian markets finished the session higher after South Korea said it would guarantee up to $100 billion in foreign-currency loans and pump billions into the banking sector.

Eyes on the economy: Fed chairman Bernanke was testifying about the economic outlook and financial markets at a House panel. In his prepared remarks, he urged Congress to consider a second economic stimulus plan to prevent a longer-lasting slowdown.

In economic news, the Conference Board released its report on leading economic indicators for September. This broad, general reading on the economy rose 0.3% versus forecasts for a drop of 0.3%, according to a consensus of economists from Briefing.com. LEI posted a revised decline of 0.9% the prior month.

Company news: Exelon (EXC, Fortune 500) said late Sunday it had made an all-stock bid worth $6.2 billion for NRG Energy (NRG, Fortune 500). The deal would create the biggest U.S. power company.

Yahoo (YHOO, Fortune 500) could be on the move after a report in the Wall Street Journal said the Internet portal is expected to disclose major cost cuts when it reports quarterly earnings Tuesday.

The Wall Street Journal also reported that General Motors' (GM, Fortune 500) hopes of a takeover of Chrysler are fading, because GM doesn't have enough money to make it happen.

The defense contractor Halliburton (HAL, Fortune 500) announced third-quarter earnings that beat expectations, at 76 cents per share. The toy company Hasbro (HAS) also beat projections, with earnings of 89 cents per share.

Oil, currency: Crude gained $1.17 to $73.02 a barrel on the New York Mercantile Exchange. OPEC is expected to cut production quotas at a meeting later this week.

Stocks down on Friday, up for the week
Features
2011 Fortune 500