Paste this link into your favorite RSS desktop reader
See all CNNMoney.com RSS FEEDS (close)
By CNNMoney.com staff
Last Updated: October 27, 2008: 9:43 AM ET
ROAD TO RESCUE
'Riding it out' 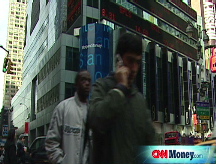 The Dow Jones industrial average (INDU), the Standard & Poor's 500 (SPX) index and the Nasdaq composite (COMP) all lost at least 1% in the early going.

Stocks have gotten hammered over the last 2 months as the financial markets crisis has accelerated and the credit market has seized up, choking off access to much-needed capital. Efforts on the part of governments around the world have helped loosen up lending somewhat, but not enough to reassure investors.

The Dow has not closed below the 8,000 mark in five years, but another bad day could take the closely watched measure below that benchmark. It has only fallen below 8,000 once, during intra-day trading on Oct. 10, in the recent market upheaval.

Sometimes investors will use an arbitrary market level to trigger automatic buying or selling programs, which can put a floor under stocks during a selloff. But many market analysts said they can't count on the 8,000 mark being such a floor at this point.

"I don't know that anyone can legitimately forecast what the bottom is going to be or where the market starts to turn," said Rich Yamarone, director of economic research at Argus Research. He said it's not clear when major investors, such as hedge funds, will be willing to return to buying.

"You don't go out in a hurricane, you wait until it blows away," he said.

Global markets: Global stock indexes continued to slide Monday. Losses piled up in Asia, where Japan's Nikkei tumbled 6.4% to close at a 26-year low, while Hong Kong's Hang Seng plunged 13%. In Europe, major markets fell in morning trading, with major markets there off between 3% and 6% in early trading.

David Kelly, chief market strategist for JPMorgan Funds, said that it's fear about the selloff in overseas markets, more than any economic or company news driving futures lower early Monday. He also is reluctant to predict when investors will put a floor under the recent downward plunge.

"The market is in a manic phase," Kelly said. "It's like a kid throwing a tantrum. At some point you have to let them cry themselves out because there's no reasoning with them. Eventually, the market will respond more to fundamentals."

In currency markets, the dollar continued its recent rise against the euro, but the yen gained on both currencies once again. The relative strength of the dollar briefly pushed oil futures below the $62 a barrel mark. The price rebounded slightly after hitting that low but was still off $2.15 to $62 for a barrel of light crude for December delivery.

The group of the world's seven major economies, the G-7, issued a statement early Monday voicing concern about "recent excessive volatility in the exchange rate of the yen and its possible adverse implications for economic and financial stability."

The statement was seen as a green light for the Bank of Japan to intervene in currency markets to stop the currency from gaining too much strength. A stronger yen can hurt the competitiveness of Japanese exports by driving up the price of that country's goods.

Economy: A report on September new home sales was on tap at 10 a.m. ET. Economists are again forecasting that new home sales fell to a new 17-year low.

The release is the first of several due out this week. Readings on consumer confidence, gross domestic product and personal income and spending are all due later in the week.

Corporate news: Ten regional banks, including Key Corp (KEY, Fortune 500)., Fifth Third Bancorp (FITB, Fortune 500) and Capital One Financial (COF, Fortune 500), announced they would be getting their own infusion of capital from the Treasury Department as part of the federal government's $700 billion Wall Street bailout. Those three will receive a total of $9.5 billion. The announcements follow the original investment of $125 billion of taxpayer money in nine of the nation's largest banks earlier this month.

In another move to try to help frozen credit markets unfreeze, the Federal Reserve is set to open its commercial paper funding facility. Commercial paper is the primary source of short-term borrowing major companies and banks to fund their daily operations running.

The credit crunch has caused major sources of that funding, such as money market funds, pull out of that market in the last six weeks, causing the amount of borrowing to tumble 20% during that time. The hope is that by the Fed starting to lend directly to companies by its purchases of commercial paper, there will be a significant improvement in frozen credit markets.

Dow component Verizon Communications (VZ, Fortune 500) posted slightly improved earnings that met the forecasts of analysts surveyed by Thomson Reuters. are forecasting a narrow gain in earnings and revenue, but the company's outlook will probably be of greater interest to investors.