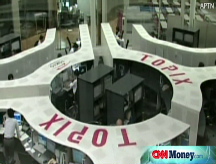 Economy: A preliminary reading on third-quarter gross domestic product revealed the U.S. economy shrank 0.3% on an annual basis, compared with a 2.8% increase in the previous quarter.

Economists were anticipating a decline of 0.5%, according to consensus estimates by Briefing.com. GDP rose at a 2.8% rate in the second quarter.

Jobless claims were unchanged but still remained elevated amid weakness in the economy, based on the latest weekly reading by the Labor Department.

Meanwhile, expectations are growing for the Bank of Japan to cut rates when it meets Friday. The European Central Bank and Bank of England, which both meet next week, also are expected to slash rates.

Other areas across the corporate sector were not as bright however. Cell phone make Motorola (MOT, Fortune 500) booked a $397 million loss, which missed analysts' estimates, due in large part to sluggish cell phone sales.

Dollars and oil: The dollar slipped versus the euro and the British pound, but was higher versus the yen. Oil prices slipped 46 cents to $67.04 a barrel on the New York Mercantile Exchange.

Throwing the bathroom sink at the economy