Stocks tumble out of the gate

Investors still trying to shake worries about the economy and financial sector; Paulson to provide update on bailout. 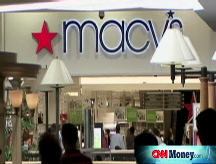 The Dow Jones industrial average (INDU) was down 2% shortly after the opening bell. The Standard & Poor's 500 (SPX) index fell 1.9% and the Nasdaq composite (COMP) slid 1.6%.

Wall Street turned in another weak performance Tuesday, with the major gauges all losing about 2%.

Treasury Secretary Henry Paulson is expected to provide an update on the $700 billion bailout for finance companies at a press conference scheduled for 10:30 a.m. ET.

Best Buy (BBY, Fortune 500) said same-store sales for the year could decline between 1% to 8% compared to its previous estimate for an increase of 2% to 3%.

Department store operator Macy's said it swung to a loss in the fiscal third quarter as sales dropped on declining consumer spending and the weak economy.

Analysts had expected a loss of 19 cents per share, according to a consensus of analyst projections from Thomson Reuters.

Sales declined 7% in the quarter.

Macy's (M, Fortune 500) stood by its earnings outlook, saying the company's profit would be near the lower end of the range if sales remain weak. Macy's expects earnings in the range of $1.30 to $1.50 per share this year.

Other retailers reporting results this week: Wal-Mart (WMT, Fortune 500), the world's largest retailer, is slated to report its results Thursday, while J.C. Penney (JCP, Fortune 500) is on tap for Friday.

Also on Friday, the Commerce Department will release its retail sales figures for October. Economists are expecting a decline of 2.1% from the prior month, according to a consensus of projections by Briefing.com.

American Express: The credit card issuer is seeking an estimated $3.5 billion in aid from the federal government, according to The Wall Street Journal.

The dollar slipped against the euro and the yen, but edged up versus the British pound.

Brace yourself for retail whiplash