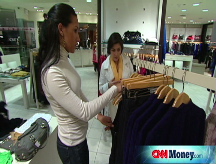 NEW YORK (CNNMoney.com) -- Stocks slumped Friday as the biggest decline in retail sales on record gave investors a reason to bail out after the previous session's big rally.

The Dow Jones industrial average (INDU), the Standard & Poor's 500 (SPX) index and the Nasdaq composite (COMP) all declined in the early going.

That was in stark contrast to Wall Street's soaring performance Thursday, with the Dow surging a staggering 552 points, or 6.7%, after three down sessions. The S&P 500 index rallied 6.9% and Nasdaq composite added 6.5%.

The Thursday rally gave markets in Asia and Europe a boost. Shares in Tokyo and Hong Kong finished more than 2% higher. European shares were higher in afternoon trading; London's FTSE and Frankfurt's DAX indexes were each up about 3.9%, and Paris' CAC index was up 2.6%.

Meanwhile, leaders of the 20 most powerful countries prepared to meet in Washington this weekend to address the global financial crisis.

Retail gloom: The Commerce Department reported that October retail sales fell 2.8% from the prior month, the worst decline since this type of record-keeping began in 1992. This is worse than the 2.1% decline expected in a consensus of projections by Briefing.com.

Not including automobiles, sales declined 2.2% in October, the government said.

Freddie bleeds money: The crippled mortgage giant Freddie Mac (FRE, Fortune 500) reported a massive loss of $25 billion for the third quarter and said it would have to tap into its $100 billion share of the taxpayer bailout. Shares fell 10% in the morning.

Layoffs: Citigroup (C, Fortune 500) is getting ready to hand out 10,000 pink slips in addition to the 23,000 jobs that it has already axed over the past year, according to The Wall Street Journal. Shares gained 3% in the morning.

Oil and money: Oil prices continued their downward course, slipping $1.11 to $57.13 a barrel on the New York Mercantile Exchange. The dollar slipped versus the yen but rose against the euro and the British pound.

Sun Microsystems to reduce up to 6,000 jobs