Futures rise, with all eyes on Citi

Wall Street poised to bounce back from deep fall on report that financial giant may sell itself. 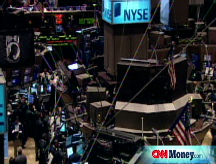 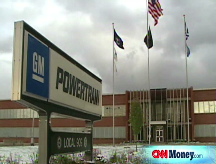 At 6:37 a.m. ET, Dow Jones industrial average, Standard & Poor's 500 and Nasdaq 100 futures were all signficantly higher, indicating that markets may follow the lead of the Asian markets, which rebounded Friday.

Dow futures were up 276 points in pre-market trading, the S&P up 27.6 points and the Nasdaq up 36.5 points. This follows a severe market plunge on Thursday, which has brought the major indexes down to about half their peak levels from 2007.

Futures measure current index values against perceived future performance and offer an indication of how Wall Street will open when trading begins in New York.

Citigroup: Hopes that Citigroup would sell itself helped boost sentiment. The Wall Street Journal reported that Citigroup's board of directors is scheduled to meet Friday to discuss ways to reverse the stock's slide.

Those measures include the possibility of selling pieces of the company or even an outright sale, the report said, citing people familiar with the situation.

Shares of Citigroup (C, Fortune 500) plunged 26% Thursday to a 15-year low. The fall came even after Saudi Prince and long-time Citigroup investor Alwaleed Bin Talal said he increased his stake to 5% following the U.S. government's $25 billion bailout for the troubled bank. Before the bailout, the prince held a 4% stake.

Citigroup, one of the hardest hit financial firms during the credit crisis, has lost more than $20 billion in the past four quarters. The financial giant is facing tough economic conditions ahead, which could translate to further losses tied to consumer and business loans.

Market plunge: Stocks are poised for a rebound after falling deeply this week. On Thursday, the S&P 500 plunged to an 11-1/2 year low. Both the Dow and Nasdaq closed at their lowest points since March 12, 2003, which was just above the low of the last bear market.

The drop was fueled by recession fears. The mood was also gloomy with the prospects of an auto bailout this week all but dead. Democratic leaders said Thursday that Congress would return in December to consider extending a $25 billion lifeline for troubled U.S. automakers if the companies devise a "viable" recovery plan.

Companies: Dell (DELL, Fortune 500) reported a decline in quarterly earnings and sales after the market close Thursday. The PC maker said the global economic slowdown has caused consumers and businesses to pull back on technology spending.

Oil and money: Crude prices bounced back from a three-year low. U.S. crude for January delivery edged up 19 cents to $49.61 a barrel in electronic trading on the New York Mercantile Exchange.

Retail gas prices in the U.S. slid below $2 a gallon for the first time in three and a half years, according to motorist group AAA. At $1.989 a gallon, the nationwide average is down more than 50% from the record hit in July.

The dollar slipped against the euro and the British pound but was higher versus the yen.