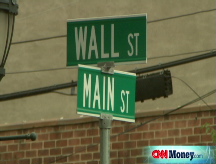 NEW YORK (CNNMoney.com) -- Stocks gained Monday morning as investors breathed a sigh of relief that the government stepped in over the weekend to rescue troubled Citigroup.

The Dow Jones industrial average (INDU), the Standard & Poor's 500 (SPX) index and the Nasdaq composite (COMP) all rallied in the early going.

The markets could use a break after last week, when the S&P 500 plunged to an 11-1/2 year low. But the Dow bounced back 494 points on Friday, its fifth-biggest one-day point increase ever.

"Obviously the news out of Citi is welcoming," said Peter Cardillo, analyst for Avalon Partners. "We might be in for another day of gains today, and if that's the case, then we'll have two days of gains."

Given the market's volatility, it isn't easy to project activity from day to day, said Cardillo. But he said the markets have discounted so much "bad ugly news" that they might be ripe for a recovery.

"Maybe this week we'll see a little bit of daylight," said Cardillo. "Maybe the market will divorce itself from the overly pessimistic sentiment."

Citi rescue: On Sunday, the U.S. government announced it would guarantee losses on more than $300 billion of Citi's troubled assets. The government also said it will make a fresh $20 billion investment in the bank.

The moves are the latest by the government to shore up the financial sector. Last week, fears about a Citigroup collapse sent shares of the firm into a tailspin. By the close of U.S. trading Friday, Citigroup (C, Fortune 500) shares were down 87% for the year.

Harvard economist Lawrence Summers is expected to be nominated to head the National Economic Council, which would make him Obama's top economic adviser in the White House.

New Mexico Gov. Bill Richardson is expected to be tapped for Commerce Secretary.

Housing: On the economic front, a report on October existing home sales is due out at 10 a.m. ET.

The National Association of Realtors is expected to announce that existing home sales dropped to an annual rate of 5.05 million in October, according to a consensus of economists surveyed by Briefing.com. This would be down from a rate of 5.18 million in the prior month.

This is just one of many economic reports scheduled for this week. Reports on consumer confidence and the gross domestic product are expected on Tuesday.

After Thursday's Thanksgiving holiday, investors will be watching the retail sector Friday in the traditional kickoff to the holiday shopping season.

World markets: The bailout of Citi helped lift European stocks. Major markets rallied in morning trading, with London's FTSE and the CAC in Paris each up more than 4% and the DAX in Frankfurt up about 3.3%. Asian markets finished mixed, with Hong Kong's Hang Seng down 1.6% and Japan's Nikkei up 2.7%.

Money and oil: The dollar slipped against major international currencies, including the euro, the British pound and the yen. Oil rose $1.27 to $51.20 a barrel on the New York Mercantile Exchange.

Gas prices sink below $2 a gallon

The week ahead: hoping for Thanksgiving
Features
2011 Fortune 500