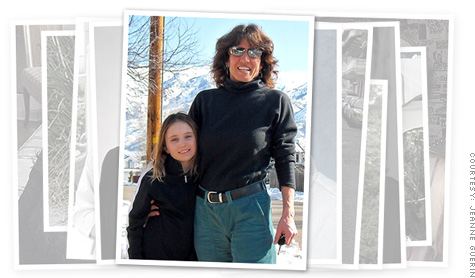 NEW YORK (CNNMoney.com) -- Most job seekers say they're willing to do whatever it takes to find work in this economy. But are they willing to move 3,000 miles away?

That was the question Jeanne Guerin was asking herself when she reluctantly applied to a job in another state after being unemployed for nearly a year. But instead of moving her family across the country, she convinced the company to let her telecommute from home.

Guerin, 48, was laid off from her post as manger of a health care technology firm in Waltham, Mass. last February. Guerin says she was completely blind sided. "I was surprised by the layoff," she said. "I had been there almost 4 years. I didn't even have an updated résumé."

Not knowing where to begin, Guerin took the advice of others, including a career coach she hired. "I got tips wherever I could. I heard a suggestion to do three significant things a day for the job search so I tried to keep at that 5 days a week."

For example, she crafted multiples variations of her résumé to fit different types of jobs and also posted it on LinkedIn.

To keep her spirits up, Guerin said she bought herself a laptop "so I wasn't stuck at home," but could still stay on top of the job search.

Meanwhile, Guerin's career coach helped her consider other positions where her skills would be transferable or were outside her industry.

The Weston, Mass-based married mother of three even applied to jobs in other parts of the country, including at a health care technology firm in Scottsdale, Ariz. "I was trying to keep an open mind," she said. "I didn't restrict my search even though I wasn't open to relocating."

When the company called her in for an interview, Guerin agreed to fly to Scottsdale, hoping that they would be receptive to her suggestion that she telecommute.

But Guerin was skeptical, and wasn't really expecting much to come of the trip. "I was really just trying to do those three things a day, and sometimes I would really be reaching," she explained of her willingness to pursue the opportunity despite the geographical obstacle.

She spent one Friday in January meeting with the team. That's when Guerin learned that others at the company telecommuted, including a vice president who also works remotely from Boston. As long as she spent one week training in Phoenix, she could work out of her home in Massachusetts.

She was hired shortly after as a senior analyst and started in mid February integrating medical, lab and pathology records. Her new job pays more than she was making at her previous job, and gives her the luxury of working from home.

"I feel so motivated and so appreciative of the opportunity," Guerin said.

While many job seekers are hesitant to uproot their lives and their families by relocating, they need to be as flexible as possible if they want to find work in the current job market, says Kathy Robinson, Guerin's career coach.

"People are often very restrictive about their searches -- they only want to look at certain titles, certain geographies," Robinson explained. "What I recommend for people is questioning the assumptions they have about the job search."

Those, like Guerin, who are reluctant to move can always inquire about telecommuting and find employers who are open to that option, Robinson said.

Roughly 12% of American workers have an employer that allows them to telework at least one day a month, according to WorldatWork, and the concept is catching on. "The practice is probably much more prevalent than that," said Marcia Rhodes, a spokeswoman for the association of HR executives.

And even if a move is required, Robinson adds that exploring job opportunities in other states can open up new possibilities for job seekers that aren't available in their home city. "If there's a lot of competition in one geographical area, there may not be as much competition in another area."