NEW YORK (CNNMoney.com) -- Stocks finished higher Wednesday after spending most of the day in the red, following another round of dismal housing news. 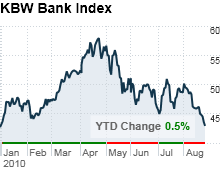 Stocks sold off sharply immediately after the housing data but managed to recoup some losses as homebuilding and housing material stocks crept higher.

"[It's] a sign that they had priced in the bad news, and this has allowed the rest of the market to come back," said Peter Boockvar, chief market strategist with Miller Taback & Co.

"[Banks] have given back the entire year of gains because they are holding mortgage-related debt," said Boockvar. "House prices have taken a leg down because of this data, and if a person pays less for a home, this hurts a bank's balance sheet."

On Tuesday, stocks sank after a 27% plunge in existing home sales fueled worries about an economic slowdown, sending the Dow 134 points lower on the day.

Last week, the Dow and S&P ended down for a second straight week as disappointing economic reports slammed investor confidence.

"It's been a brutal few weeks," said Phil Orlando, chief equity market strategist at Federated Investors. "Stocks are extraordinarily cheap and oversold at this point, but the question is, are they sufficiently cheap to discount the economic weakness?"

The best moves for home buyers and sellers

The disappointing data comes right on the heels of another dismal housing report on Tuesday, which showed a sharp drop in existing home sales.

Meanwhile, new orders for long-lasting goods fell short of forecasts, edging up a modest 0.3% in July. Economists had expected the government report to show a 3% jump.

Companies: Homebuilder Toll Brothers (TOL) booked its first quarterly profit in three years on Wednesday, thanks largely to a boost from the homebuyer tax credit.

Late Tuesday, Standard & Poor slashed Ireland's sovereign debt rating to double-A-minus due to the massive cost of bailing out the nation's banks.

Currencies and commodities: The dollar fell against the euro and the British pound, but firmed versus the Japanese yen.

Are you under the age of 35 and pulling your money out of the stock market? What's your investing strategy amid the current economic uncertainty? Are you still willing to take on more risk? E-mail your story to Hibah.Yousuf@turner.com and you could be part of an upcoming feature. For the CNNMoney.com Comment Policy,click here.