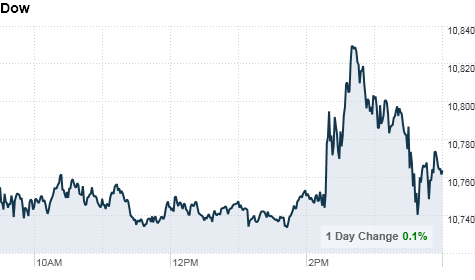 NEW YORK (CNNMoney.com) -- Stocks ended the session mixed after giving up gains posted during a short-lived afternoon rally sparked by the Federal Reserve's signal that it will take any action necessary to support the recovery.

The Dow Jones industrial average (INDU) finished up 7 points, or 0.1%. Earlier, it had added as many as 79 points.

Stocks had been drifting lower for most of the session as investors awaited news from the Fed, which left interest rates unchanged near historic lows between 0% and 0.25%, where they have been since December 2008.

But investors looking for references to quantitative easing, the central bank's recent policy of buying bonds to stimulate the economy, cheered after Federal Reserve said it was "prepared to provide additional accommodation if needed to support the economic recovery."

"The market liked the fact that the Fed said it will take whatever measures are necessary to keep the economy from slipping further," said Tom Schrader, managing director at Stifel Nicolaus. "Investors viewed that as sign that the Fed may implement further quantitative easing measures in the future if they need to."

But the rally lost steam, as investors considered the Fed's economic outlook and the effectiveness of the possible stimulus measures.

The central bank warned that the recovery has "slowed" in recent months and is "likely to be modest in the near-term."

"Investors are also concerned the about the pace of the recovery and fear that quantitative easing measures are the only tool the Fed has left," Schrader said. "They're not sure if those are enough, or even if they were all that effective the first time around," he said.

At its previous meeting, the Federal Reserve was cautious about the recovery, saying it plans to reinvest its debt into longer-term Treasury securities.

Stocks had closed at their highest levels since mid-May on Monday as the S&P 500 index crossed technical levels after a key group of economists called an official end to the recession.

Economy. The government released one of several readings on the housing market due this week.

Housing starts hit a four-month high, surging 10.5% to an annual rate of 598,000, the Commerce Department said. Economists were expecting the annual rate to rise by a modest 1.7%, according to consensus estimates from Briefing.com.

Adobe said it expects to earn between $950 million and $1 billion in revenue during the current quarter. Analysts polled by Thomson Reuters forecast the San Jose, Calif.-company to rake in over $1 billion.

Hewlett-Packard said late Monday that it has settled its lawsuit against Mark Hurd, the company's ousted CEO, after the tech giant claimed he breached his separation agreement by taking a job at rival Oracle.

Hurd resigned from HP (HPQ, Fortune 500) in August after he was cleared of sexual harassment charges but accused of violating the company's code of ethics. Shares of HP ended down 0.3%.

Currencies and commodities: The dollar fell against the euro and the Japanese yen and was up slightly against the British pound.

The expiring October oil futures contract fell $1.34 to settle at $73.52 a barrel. Oil futures for November delivery, which will be the active contract beginning Wednesday, fell $1.27 to $74.93 a barrel.

Gold for December delivery fell $6.50 to settle at $1,274.30 an ounce, but surged in electronic trading to a new record high following the Fed's announcement. The precious metal spiked to $1,292.40 an ounce in the late afternoon.

Bonds: The yield on the benchmark 10-year note fell to 2.62% from 2.72% late Monday as prices moved higher. Treasury prices and yields move in opposite directions.