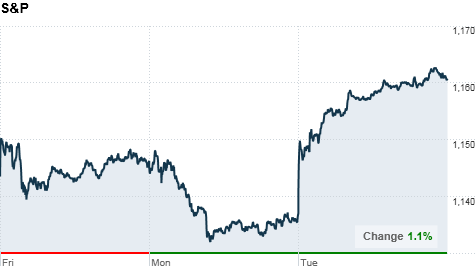 NEW YORK (CNNMoney.com) -- U.S. stocks rallied right out of the gate and continued to surge Tuesday, with all three major indexes gaining about 2% and finishing at their highest levels since May. Investors welcomed a surprise move by the Bank of Japan to cut its key lending rate, as well as improved data for the U.S. service sector.

Early Tuesday, Japan's central bank announced a move to lower its key interest rate to between 0% and 0.1%. It previously stood at 0.1%. The bank also said it would purchase about $60 billion of government bonds and other assets, to boost the pace of the country's recovery.

The Bank of Japan downgraded its economic forecast, but investors took the monetary policy move as a hopeful sign for the world's third-largest economy.

"The markets are feeling reassured after Japan's move to ease monetary policy and the fact that the service sector, which accounts for 90% of our economic activity, is stronger than we were expecting," said Jack Ablin, chief investment officer at Harris Private Bank.

U.S. stocks are coming off of a big dip on Monday, when investors were feeling cautious ahead of corporate earnings season and key employment data due later in the week. Last week, they kicked off the start of October and the fourth quarter with modest gains.

"The lynchpin economically is still unemployment," said Erick Maronak, senior portfolio manager at Victory Capital Management. "That's what gets people off the ledge. Some improvement there would be more than welcome by investors and non-investors alike."

Economists polled by Briefing.com expect the unemployment rate to have risen to 9.7% in September, up from 9.6% in August, when the government reports the figure Friday.

World markets: Japan's Nikkei rallied 1.5% after the Bank of Japan's decision, and the Hang Seng in Hong Kong ended the session up 0.1%. The Shanghai Composite was closed for the week-long Golden Week holiday.

European investors welcomed better-than-expected data on the euro-zone services sector, but gains were limited by fears about Ireland's debt crisis. Moody's said Tuesday that it was considering a possible downgrade for the country.

Economy: The Institute for Supply Management's index -- measuring the nation's non-manufacturing business activity -- rose to 53.2 in September, from 51.5 the previous month. Economists were expecting the gauge to inch up to 51.8. Any number above 50 indicates growth in the sector.

Currencies and commodities: The dollar fell sharply against major currencies Tuesdays, with the dollar index touching its lowest levels since January.

The greenback sank to an 8-month low against the euro, and also slipped versus the British pound and the Japanese yen.

"There's a very bearish tone toward the U.S. dollar regardless of the broader economic conditions around the globe," said Gareth Sylvester, senior currency strategist at HIFX in San Francisco. "The market is largely fixated on the story of a weak domestic economy and therefore a weak dollar."

The dollar has been under pressure since the Federal Reserve announced it may buy long-term U.S. Treasurys to boost the economy. While the Japanese central bank announced a similar move for its economy, it didn't help curb the strength of the yen.

Rather, the dollar fell to the lowest level against the yen since the Japanese government announced intervention, a 15-month low. News of fiscal woes in Ireland have been largely ignored as well, Sylvester said.

"The currency market has a blinkered attitude at the moment" he said. "But if upcoming economic data consistently shows that the worst of the U.S. economy has been seen, investors may start to shift focus."

The buck's softness has helped boost prices of commodities priced in U.S. dollars, including gold and oil.

Gold futures for December continued to run in record territory. Prices spiked $23.50 to settle at an all-time high of $1,340.30 an ounce, after reaching a fresh intraday record trading high of $1,342.60 an ounce earlier Tuesday.

Bonds: Prices for U.S. Treasurys rose, pushing the yield on the 10-year note down to 2.47% from 2.48% late Monday. Bond prices and yields move in opposite directions.