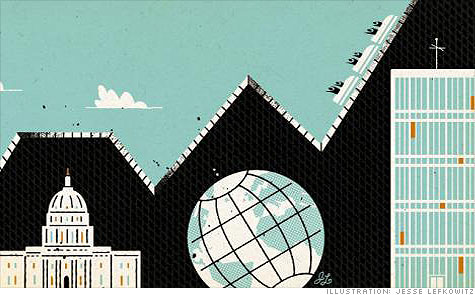 NEW YORK (MONEY Magazine) -- Before looking ahead to 2011, you may need a moment to recover from 2010's wild ride. Sure, the Standard & Poor's 500 index is up 8% so far this year. But along the way the stock market plunged 16% from April to July, then rebounded 9% in September -- the biggest gain for that month in more than 70 years.

These extreme swings have scared off many people, who have been funneling cash into bond funds instead.

"Investors are still climbing a wall of worry, which is holding the market back," says David Kastner, chief market strategist for Schwab Investment Advisory Services.

The fact is, you have reason to be concerned, since conflicting valuation measures of the market make it especially tough to gauge where stocks are headed.

Based on 10-year average earnings, for example, stocks are overvalued after running up 75% since the market bottom in March 2009.

Meanwhile, corporate profits, on pace to expand 45% this year, are expected to climb another 14% in 2011.

"That would only get earnings back to 2007 levels, which still leaves some room for stocks to run," says S&P chief investment strategist Sam Stovall, who looks for the benchmark 500-stock index to gain 7% over the next 12 months.

Concerns about the economy have also driven down bond yields, as investors flock to the seeming safety of fixed-income assets. Recently 10-year Treasury notes were yielding 2.6%, down from 3.9% in April.

Since bond prices rise when yields fall, that drop in interest rates has led to solid gains lately -- total returns on corporate issues have ranged from 9% to 16% over the past year.

But since the reverse is also true, there is a real risk that you could lose money on your fixed-income investments in the next year or so if interest rates head up again, as most economists expect.

What are your financial goals for 2011?

ACTION PLAN 1: Tilt toward stocks. Rebalancing at the start of a new year is a good habit, but it's even more timely now because the surge in bond prices over the past three years means your asset mix is probably a bit off kilter.

So take some profits in fixed income and shift the proceeds into stocks. Better yet, put, say, five percentage points more into equities to guard against the possibility of rising interest rates damaging your bonds.

ACTION PLAN 2: Go big. "In choppy economic seas, you want to be in a super-tanker that can handle the waves," says Sam Stewart, president of the Wasatch funds. And Duncan Richardson, chief equity investment officer at Eaton Vance, adds that "you can earn a 3.4% yield on a large stock like Johnson & Johnson, which beats the yield on 10-year Treasuries."

ACTION PLAN 3: Venture overseas. Emerging markets remain on track to outpace the U.S. over the next few years because of their strong economies, says financial adviser Chris Cordaro. But emerging-market stocks pose a risk, after having experienced a huge run. And you want to limit your exposure to no more than 10% to 15% of your equities, since emerging-market shares can experience sudden, steep losses.

A safer way to boost your exposure: Own blue-chip stocks that do a good deal of business in these regions. MONEY 70 funds that invest in such stocks include Oakmark International (OAKIX) and T. Rowe Price Blue Chip Growth (TRBCX).

ACTION PLAN 4: Stay short. If rates rise, short-term bond funds will suffer the smallest losses. So make your core fixed-income fund one with a duration of four years or less (find data on duration, a measure of interest-rate sensitivity, at Morningstar.com).

A bond fund with a duration of seven years would lose 7% if rates rise one percentage point, and vice versa. A total bond market index fund sports a duration of 4.4 years. But you can lower that by adding a small weighting to FPA New Income (FPNIX), which has hunkered down in short-term Treasury and government agency bonds, and has a duration of just 1.2 years.

ACTION PLAN 5: Take a calculated risk. With a typical yield of 7%, junk bond funds offer a fatter payout than the measly 4% rate on high-quality bonds. High-yield debt can be risky if the economy hits the skids. But "there's less likelihood of default now, since most companies have shored up their balance sheets," says Kaufman.

Still, stick with higher-quality junk and limit your stake to no more than 5% to 10% of your fixed income. Meanwhile, a 5% allocation to foreign bonds can give you a useful hedge against a falling dollar. Two solid choices: Vanguard High-Yield Corporate (VWEHX), which buys higher-quality junk debt, and T. Rowe Price International Bond (RPIBX), a MONEY 70 fund.

WILDCARD: If the U.S. slips back into recession, you might see the onset of deflation, which would pummel stocks. That's because falling prices would lower demand, as shoppers wait for even better bargains ahead. That in turn would put a damper on profits. Treasury bonds, though, would fare well.

WHAT TO WATCH: Keep tabs on corporate earnings trends at Standardandpoors.com. Click on the S&P 500 link. After you register for free, the site will let you track Wall Street earnings and see if firms are using their profits to boost dividends. You want the ratio of dividend increases to decreases to be at least 25 to 1.

VIDEO: Get the most out of ETFs