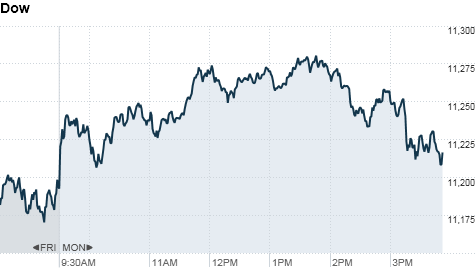 NEW YORK (CNNMoney.com) -- After posting gains nearly all day, U.S. stocks tumbled at the session's close Monday, as investors remain jittery during a week with a full economic calendar.

But stocks struggled to hold on to those gains toward the closing bell, as investors gear up for more economic data due out later this week. Tuesday brings reports on industrial production and the latest Producer Price Index, an important reading on the price of goods at the wholesale level.

"This market never really had a lot of conviction going in, even though we had some pretty good economic data to chew on. Investors just didn't have the passion for buying stocks today," said Jack Ablin, chief investment officer for Harris Private Bank in Chicago.

Meanwhile, worries about a sovereign debt crisis in Europe are once again bubbling to the surface, after the Group of 20 meeting of world leaders last week revived jitters about the global economy. And Irish debt continues to be a sore point, even as the country's government insists that it will not need a bailout.

"We've got some problems in the euro zone that are continuing to escalate," said Phil Streible, senior market strategist with Lind-Waldock. "The economic data hasn't been all that great, and I'm not so comfortable remaining upbeat about the stock market at these levels," he added.

Stocks ended on a sour note last week, as concerns about the global economy took center stage. All three major indexes closed with their worst weekly declines in three months.

Economy: A government report released before the market's open revealed good news for retailers heading into the holiday shopping season. Retail sales increased 1.2% in October -- a far better number than the 0.6% gain expected by analysts.

The report comes at the perfect time for retailers hoping for strong holiday sales. "There is a lot of demand out there and people feel better. Those who have money are spending it," said Harry Clark, founder and CEO of Clark Capital Management Group.

But two other economic reports were less upbeat, and could be holding stocks back from climbing more.

Investors cautiously looked to a bigger-than-expected rise in inventories at U.S. businesses in September as a sign that demand is not keeping up with supply. Inventories increased 0.9% from the prior month, higher than the 0.6% increase economists had been expecting.

A separate report on manufacturing in the New York area indicated that activity declined in early November from the month before.

Tax policy is also likely to be on investors' minds as Congress reconvenes for a lame-duck session. Lawmakers have yet to decide the fate of key tax breaks that are due to expire at the end of 2010

Companies: After the bell, Nordstrom (JWN, Fortune 500) reported third-quarter earnings of 53 cents per share, slightly better than the 52 cents per share analysts were expecting. Nordstrom shares rose 1% in after-hours trading.

Earlier in the day, Caterpillar (CAT, Fortune 500) announced its plans to buy mining equipment giant Bucyrus International (BUCY) in a deal valued at $7.6 billion. The price per share is valued at a 32% premium to Bucyrus' share price as of Friday. Shares of Caterpillar edged up 1%, while Bucyrus's stock rose 29%.

IPOs are back: But where the heck is tech?

The company said its earnings were hamstrung by overall sluggishness in the economy, and that uncertainty in employment and housing continue to pressure the industry. Lowe's shares fell 1.1%.

Currencies and commodities: The dollar strengthened against the euro, the Japanese yen and the British pound.

Oil for December delivery fell 2 cents, settling at $84.86 a barrel.

Double life of the American worker

Blowing up the tax code