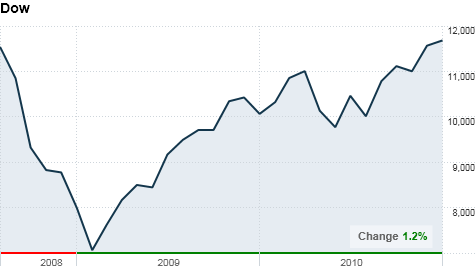 NEW YORK (CNNMoney) -- The Dow closed at a fresh two-year high Monday, getting the new year off to a strong start, after manufacturing and construction data stoked optimism about the economy.

Here's what the market sounded like in 2010. Take a listen.

Bank of America (BAC, Fortune 500) was the biggest gainer on the blue-chip index, leading financial shares higher. Its shares surged more than 6% after the bank announced a $3 billion mortgage settlement with Fannie Mae and Freddie Mac earlier in the day.

While the economy has a long road to recovery, investors are bullish about the month ahead.

"Over the long term, January has usually been a strong month for stock performance, although the last two Januarys have been terrible," said Jack Ablin, chief investment officer with Harris Private Bank in Chicago. "This is one January where I'm hopeful we're back to our historical pattern again."

Stocks ended a roller coaster year with a lackluster showing Friday, but all three major indexes logged double-digit percentage gains for the year. The Dow Jones industrial average finished 2010 up 11%, the S&P 500 climbed 13% and the Nasdaq rose 17%.

Economy: Traders mulled over an economic report showing the manufacturing industry expanded for the 17th straight month in December.

The Institute for Supply Management's manufacturing index for December edged up to 57 in December, up from 56.6 in November. The index was roughly in line with economists' expectations for 57.3, with any number above 50 indicating growth in the sector.

Construction spending data also came in after the opening bell -- showing a 0.4% rise in November, following a 0.7% rise in October. Economists were looking for an increase of 0.2%.

Meanwhile, the most closely watched report of the week is the government's reading on the labor market, due Friday. Economists expect employers boosted payrolls by 132,000 last month, following a 39,000 gain in November.

Shares of Barnes & Noble (BKS, Fortune 500) jumped 9%, after the bookseller said its same-store holiday sales rose 9.7% -- helped by demand for its Nook e-reader.

Apple Inc (AAPL, Fortune 500) also started the year off on the right foot, with its market value surpassing $300 billion for the first time ever. Shares of Apple rose 2.2%.

Most Asian markets were closed Monday. Tokyo and Shanghai were dark, while the Hang Seng in Hong Kong finished 1.7% higher.