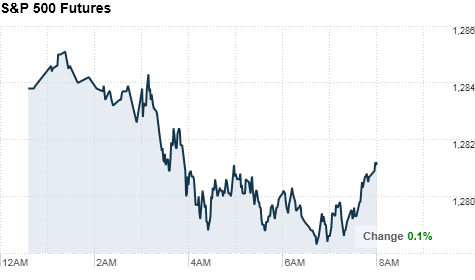 NEW YORK (CNNMoney) -- U.S. stocks were headed for a flat open Monday, as investors mulled earnings results from McDonald's and Halliburton, with no market-moving economic reports on tap.

Stocks closed mixed Friday, with technology shares lagging behind the broader market. For the week, the Dow gained 1.2% while the S&P was flat. The Nasdaq lost about 1.7% over the last five trading days.

"We would have thought that with such good performance out of December that markets would be pulling back and consolidating, but they have resisted," said Bruce McCain, chief market strategist at Key Private Bank.

Positive economic reports and strong earnings are likely to continue to help markets head higher during the first half of the year, he said.

"At this point we've had a really good string of economic reports, and we've had some disappointing earnings along the way but by and large earnings have been good, and they should be strong going forward," McCain said.

Companies: Before the opening bell, Halliburton (HAL, Fortune 500) logged earnings of 68 cents a share on revenue of $5.2 billion. That beat expectations, with analysts surveyed by Thomson Reuters looking for earnings of 63 cents, on $4.9 billion in revenue. Shares of the company edged up modestly in pre-market trading.

American Express (AXP, Fortune 500) is expected to report earnings of 97 cents per share, on revenue of $7.3 billion, after the market close.

World markets: European stocks were mixed in morning trading. Britain's FTSE 100 edged up 0.3%, while the DAX in Germany slipped 0.5% and France's CAC 40 was flat.

Asian markets ended the session mixed. The Shanghai Composite slid 0.7% and the Hang Seng in Hong Kong fell 0.3%, as Japan's Nikkei ticked up 0.7%.

Economy: There are no major economic reports on tap for Monday.

Cocoa futures for March delivery jumped 4.5% in early trading, after the Ivory Coast put a one-month ban on cocoa exports.

Bonds: The price on the benchmark 10-year U.S. Treasury was little changed, yielding 3.42%.

Help Desk
Track testing tires to find the best
Find out how TireRack tests and reviews tires and why choosing the right ones for your car is so important. Play
Markets
Data as of 3:57am ET
Data as of 2:44pm ET
Sponsored by
Sections