Jobs are back! But the pay stinks 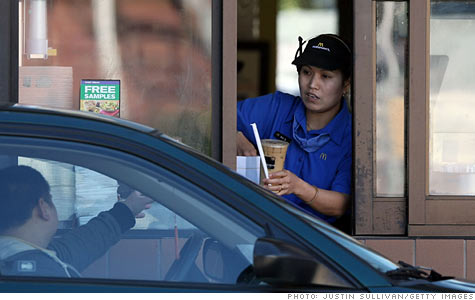 About 75% of jobs created so far in the recovery have been low-wage jobs, according to one analysis. By Chris Isidore, senior writerJanuary 31, 2011: 12:22 PM ET

NEW YORK (CNNMoney) -- There are two problems with the jobs recovery to date. Employers haven't added enough jobs. And those they have added aren't particularly good ones.

The former has gotten a lot of attention. But the low-wage jobs that have been added are also a cause for concern.

"Growth has been concentrated in mid-wage and lower-wage industries. By contrast, higher-wage industries showed weak growth and even net losses," said Annette Bernhardt, policy co-director for the National Employment Law Project. She said that growth has been far more unbalanced than during previous job recoveries.

Bernhardt's analysis of the first seven months of 2010 found that 76% of jobs created were in low- to mid-wage industries -- those earning between $8.92 to $15 an hour, well below the national average hourly wage of $22.60.

But the biggest problem is continued job losses in higher-wage industries severely hit by the bursting of the housing bubble -- construction and financial services. Recoveries in those sectors helped lead the economy out of earlier downturns, but they're still suffering more than a year and a half after the official end of the Great Recession.

High-wage sectors -- made up of jobs that pay between $17.43 and $31 an hour -- accounted for nearly half the jobs lost during the recession, but have produced only 5% of the new jobs since hiring resumed, Bernhardt's study showed.

Best Companies to Work For: In employees' words

Even in some of the higher-wage industries that are hiring, it's lower-wage occupations within the sector where the jobs are being added, according to William Rodgers, chief economist for the Heldrich Center for Workforce Development at Rutgers University.

And those temporary jobs accounted for nearly one in four jobs created by all types of businesses last year.

"This recovery is being driven very much by temp employers," said Rodgers.

A big worry is whether the trend toward low-wage jobs will continue. Experts say it's too soon to tell.

But the Bureau of Labor Statistics has made some worrisome projections about the pay for jobs likely to be created.

The BLS's most recent job growth forecast, published back in November 2009 and projecting the job market from 2008 through 2018, identified 30 different occupations expected to experience the best growth.

The good news is that the occupation expected to add the most jobs over those 10 years -- registered nurse -- is considered "very high wage." But the six occupations with the largest gains are all classified as either "low wage" or "very low wage." Among those jobs are home health aides, retail sales people and food preparation -- including fast food workers.

Overall, 55% of the jobs growth forecasted in the 30 fastest-growing occupations identified by BLS, are considered to be low- or very low-wage.

The greater number of low-wage jobs shouldn't be a surprise, said Kristina J. Bartsch, chief of occupational outlook for BLS, simply because higher-wage occupations are always going to be in the minority. Some of the jobs projected to enjoy the fastest pace of growth are very high-wage.

For example, network systems and data communications analyst jobs are projected to increase by more than 50%, but they are still only a small portion of the workforce.

"By and large, occupations that are more high skill, and have high wages, are fast growing," she said. "They're just not as huge as waiters and waitresses."

Did you get a low-paying job in 2010? Tell us about it and you could be included in an upcoming story on CNNMoney. For the CNNMoney Comment Policy, click here.