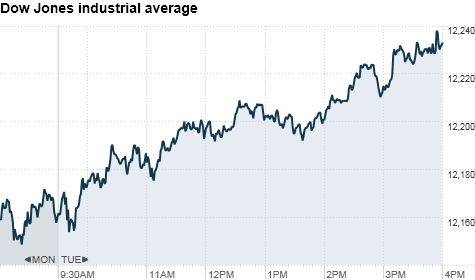 The Dow's 70-point gain came despite the People's Bank of China announcement early Tuesday that it would raise bank's borrowing and lending rates by a quarter percentage point. The move, the bank's third since October, comes as Chinese policymakers look to gradually cool the world's second-largest economy without halting growth.

"The China rate hike wasn't a surprise, but it shows that they're being proactive about curbing inflation," said Frank Davis, director of sales and trading at LEK Securities.

Outside of the China news, traders had little to act upon. Without any major negative news, traders said stocks will probably continue to float slowly higher. The Dow has been up six of the last seven sessions and 10 of the last 12 sessions.

"There's been this general optimism pushing the market right now that has been difficult to overcome," said Marc Pado, chief market strategist for Cantor Fitzgerald. "Retail investors are coming back, money is returning from overseas and it's frustrating investors who've wanted to short this market."

Investors started the week in high spirits Monday, as several major mergers pushed the Dow Jones industrial average (INDU) up for a sixth day in a row. The 30-stock index closed up 69 points, or 0.6%.

The deals of the day included AOL's (AOL) acquisition of news blog The Huffington Post for $315 million, and a merger between oil drillers Ensco (ESV) and Pride International (PDE).

Companies: Toyota shares advanced 4% after a 10-month U.S. government probe found no electronic flaws in the automaker's safety systems, which were blamed for unintended acceleration in Toyota cars and trucks.

Currencies and commodities: The dollar fell against the euro, but gained versus the British pound and Japanese yen.

The U.S. government auctioned $32 billion in 3-year notes, which received mixed demand from investors. The notes auctioned at a yield of 1.349%, slightly higher than expected.

'How I survived my career reinvention'