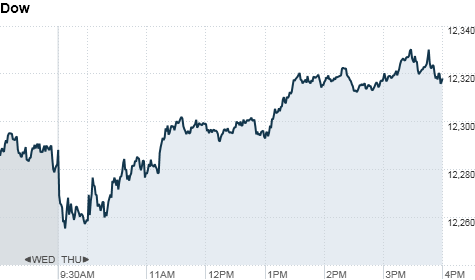 NEW YORK (CNNMoney) -- U.S. stocks ended at fresh multi-year highs Thursday, as investors focused on an upbeat manufacturing report and looked past indications that inflation is heating up.

All three of the major indexes finished the session at their highest levels in more than two years for a second day on Thursday.

Investors have been in a bullish mood so far this year, as the outlook for the U.S. economy improves. While inflationary concerns are now creeping into the picture -- with key readings on inflation this week showing that prices are rising more than expected -- investors remain assured that the Federal Reserve remains willing to step in if conditions deteriorate.

"Inflation has been the story du jour lately, and there's definitely a concern about the rising cost of commodities and how that's going to affect the margins of companies," said Tyler Vernon, CIO of Biltmore Capital.

"But at the same time, the Fed continues to be focused on the stock market and supporting the market. So at this point any news is good news, because investors are just thinking the Fed will step back in if things start slowing down," he added.

Is the stock rally getting ridiculous? - The Buzz

While stocks may take a breather in coming weeks, the trend is likely to remain positive until the Fed pulls the plug on its quantitative easing policy, said Dean Barber, president of Barber Financial Group.

"We're up significantly from where we were in September of last year, so I doubt it's sustainable, but we'll continue to be in a gradual, slightly upward trend at least through the summer," he said.

Economy: The consumer price index for January rose 0.4% month-to-month seasonally adjusted, compared to expectations of a 0.3% increase. The core CPI -- which excludes food and energy prices -- rose 0.2% month-to-month, compared to an expected increase of 0.1%.

The report follows on the heels of the government's Producer Price Index, a measure of wholesale inflation, which came out Wednesday. That index rose 0.8% in January, which was also larger than expected.

"Inflation is definitely out there, with both reports coming in hotter than expected," said Vernon.

Because the Producer Price Index is rising at a faster pace than the consumer price index, this indicates that companies aren't passing on the cost of raw materials to consumers, which Vernon said is a concern as companies' margins start to shrink.

In fact, 25% of companies in the S&P 500 that have reported earnings this season had lower margins because of rising commodity costs, he added.

Not only do rising prices hurt companies' margins, it means that the Federal Reserve may eventually be unable to continue propping up the economy with its policy of quantitative easing, he said.

"In the short term that's good news for stocks as investors get out of fixed income and look for a home in stocks, but in the longer term it represents issues, because investors are looking at the fact that if we're getting inflation, the Fed can't continue its process of of supporting the market."

Meanwhile, the government's weekly report on the number of people filing for jobless benefits jumped to 410,000 for the week ended Feb. 12, which was close to expectations. The report was expected to show an uptick to 408,000, from 383,000 in the previous week.

The preliminary Philadelphia Fed index, a regional reading on manufacturing, surged to 35.9 in February from 19.3 in January. The index was forecast to rise modestly to 21.

Keith Springer, president of Springer Financial Advisors, said the balance of good news like the Philadelphia Fed Index and weaker news like the report on jobless claims provides "a Goldilocks environment where the economy is not growing too fast to make the Fed stop the easing but not slow enough to give us a double dip." And this is what will help the momentum continue, he said.

Currencies and commodities: The dollar rose modestly against the Japanese yen, the British pound, and the euro.

Barber said the devaluing of the dollar through the Fed's quantitative easing is not only boosting the stock market, but causing commodity prices to climb.

"Prices aren't increasing because of increased demand -- the Fed is pumping so much money into the system and purposely devaluing the dollar, and that's where inflation is coming from," said Barber. "People are buying gold, gold, gold, and things like wheat, corn and cotton have all been driven higher too."

The World Bank said in its latest report on the global food crisis that its price index jumped 15% between last October and last month, hovering just below its 2008 peak. Wheat, corn, sugar, fats and oils have led the price increases.

Shares of Dr. Pepper Snapple Group (DPS, Fortune 500) rose 6% after the soft drink company reported an 11% jump in earnings per share. The company's net sales rose to more than $1.4 billion.

Shares of Williams Partners (WMB, Fortune 500) -- a company focused on natural gas transportation, processing and storage -- jumped 8% after the company said it would hike its dividend and split into two entities. The company also raised its guidance for 2011-2012.

The stock price for Cliffs Natural Resources (CLF) climbed more than 7% after the company reported that it doubled its full-year revenue to $4.7 billion.