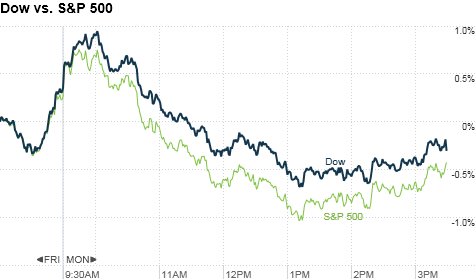 NEW YORK (CNNMoney) -- Surging oil prices continued to rain on the stock market's parade at the start of the week. Add a lagging tech sector and Greece's latest debt woes to the mix, and Monday was a downer to say the least.

"It's pretty clear that we're dealing with international and Middle East tensions here," said Jason Pride, director of investment strategy at Glenmede. "The reality is, oil is getting into the price range now where people are going to start questioning its impact on the broader economy."

Investors are keeping a close eye on commodities, after crude oil rose to more than $106 a barrel early Monday on continued tensions in Libya. Oil finished the day at about $105.44, an increase of more than a dollar.

"The stock market wants to bask in the recent slew of good economic data, but its Achilles' heel is this oil market right now," said Phil Flynn, senior market analyst with PFG Best. "This is really a situation that we're going to have to monitor every day."

Meanwhile, gold set a new intraday record in early trading, rising to $1,445 an ounce, as investors sought safety in the precious metal. It pared back those gains later in the day though, settling at $1,434.50 an ounce on the Chicago Mercantile Exchange.

U.S. stocks managed to claw out gains last week, despite a sharp sell-off on Friday.

Starbucks is kicking off a campaign celebrating its 40th anniversary this week, starting with newspaper articles Monday and rolling out with television ads and in-store promotions Tuesday.

"The country's very large debt burden and the significant implementation risks in its structural reform package both skew risks to the downside," Moody's wrote in its report.

Currencies: The dollar gained against the euro and the British pound, but fell versus the Japanese yen.

Speculators double down on oil