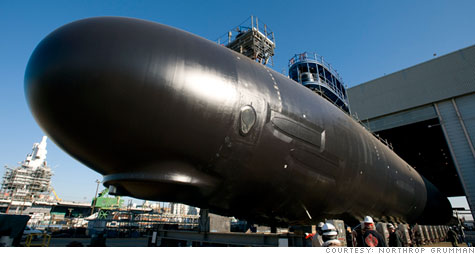 The Department of Defense has put the construction of a Virginia-class attack submarine on hold due to budget uncertainty. By Charles Riley, staff reporterMarch 24, 2011: 9:36 AM ET

The uncertainty caused by Congress' inability to pass a budget cuts across many corners of the government.

The Defense Department has put the construction of an attack submarine on hold and is struggling to avoid disrupting the workforce at the Virginia shipyard where it's built. The Justice Department is running out of money to house prisoners. And the National Institutes of Health is giving out less funding for scientific research.

Since October, agencies have been stuck at last year's funding levels as Congress has passed six so-called continuing resolutions.

And after playing it cool for months, they are starting to lay out the consequences for lawmakers, who are -- in theory -- working on a plan to fund the government for the next six months.

At the Pentagon, officials are flat out telling Congress that they are already in serious trouble. The military has delayed 75 projects, and the Army and the Marine Corps have imposed temporary civilian hiring freezes.

The Army has deferred a contract for new Chinook helicopters and delayed refurbishment of war-torn Humvees.

Social Security Commissioner Michael Astrue said his agency won't open eight new offices and has cut back on mailing benefit statements to non-beneficiaries over the age of 25.

The SEC delayed the creation of five key initiatives mandated by Dodd-Frank, including a new office of women and minority inclusion and a whistle blower unit.

At the National Institutes of Health, officials are funding some grants at 90% of their optimal level, due to uncertainty over the budget.

Funding the government -- 3 weeks at a time

Sally Rockey, deputy director for extramural research at the NIH, said that funding will be restored if Congress can set a spending level for the rest of the year. But Rockey warned that the longer lawmakers drag their feet, the tougher it is for the agency.

At this point, there is no chance lawmakers will pass a real budget. Instead, the most likely scenario is that Congress will pass a spending bill for the next six months that keeps funding at fiscal year 2010 levels, while trimming fat around the edges.

But some agencies argue that's not going to work.

Pentagon officials say if they don't get more funding -- and fast -- troops won't get all the training they need, flight time for pilots will decrease and maintenance will suffer in a way that does serious damage to military readiness.

Defense Secretary Robert Gates has described the prospect of a year without a funding increase as "a crisis at our doorstep."

Attorney General Eric holder said he will be forced to consider layoffs if his agency doesn't get more funds, and he might run out of money to house additional prisoners.

For lawmakers, the budget calculus isn't going to get any easier. The current spending bill expires on April 8. Republicans favor steep cuts to spending, while President Obama favors a more measured approach.

Patience is wearing thin on both sides.

When the House passed the most recent stopgap bill, 54 Republicans joined 104 Democrats to vote against the measure, which cut $6 billion in spending.

That siphoning of votes suggests that reaching a long-term agreement amenable to both parties will be more difficult this time around. The good news is lawmakers usually manage to hammer out a deal before the deadline.

For agencies, the question is: A deal at what funding level?