Gold: 'This is the perfect storm' 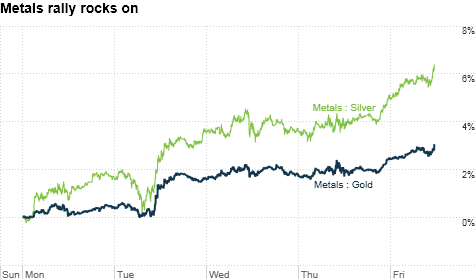 NEW YORK (CNNMoney) -- Gold prices have hit a series of record highs this week, as a combination of inflation worries, a weaker U.S. dollar and geopolitical turmoil have weighed on investor confidence.

Gold has been on a tear since late January, when the metal traded as low as $1,320 an ounce. But the rally kicked into high gear this week, with gold touching new highs every day except Monday.

Silver, meanwhile, rose over 2% to $40.46 an ounce, marking a fresh 31-year high on Friday. Indeed, silver outperformed gold for the week, rising nearly 7% versus a 3.2% gain for the yellow metal.

This week's gains were driven by the confluence of several gold-friendly developments, said George Gero, a senior metals analyst at RBC Wealth Management.

"This is the perfect storm," he said.

Top of the list is inflation, which has been rising sharply in emerging economies and is becoming more of an issue in Europe. Gold is seen as a hedge against inflation because tangible assets like precious metals tend to hold their value better than stocks or bonds when prices are rising. As such, gold prices often rise when investors see inflation on the horizon.

In an effort to "anchor" rising consumer prices, the European Central Bank announced a widely anticipated interest rate hike Thursday. And China has been gradually tightening its monetary policy this year as prices for food and energy surge.

While investors are nervous about inflation in the United States, the Federal Reserve is split on whether prices risk getting out of control.

Dallas Federal Reserve president Richard Fisher, the U.S. central bank's most vocal inflation hawk, said Friday that "there is the risk that we might breach our duty to hold inflation at bay." However, other Fed officials, including chairman Ben Bernanke, maintain that inflation remains tame enough to keep rates low for some time.

In addition to inflation worries, traders said gold prices are being supported by a weak U.S. dollar. The dollar index, which measures the greenback against a basket of other international currencies, fell to a 16-month low on Friday.

A softer dollar typically boosts prices for commodities that are priced in the U.S. currency, such as gold and crude oil, because it makes them more lucrative for buyers using other currencies.

As if that weren't enough, a host of geopolitical concerns continue to boost demand for gold as a safe haven.

Turmoil in the Middle East has roiled the markets this year and the bloody stalemate in Libya threatens to draw Western powers into a quagmire. Japan, reeling from last month's natural disasters and ensuing nuclear crisis, was hit by another major earthquake Thursday.

At home, investors are worried about a looming government shutdown if Washington is unable to resolve a budget impasse Friday.

Gold is seen by many investors as the best place to park money when the economic or political outlook is uncertain. And given the meager yields on U.S. Treasury bonds, also considered a safe haven, there is little competition for gold.

Looking ahead, investors expect the gold rally to continue for the next few months as the market grapples with multiple uncertainties.

Sanchez said $1,500 an ounce is the next target level for many gold traders, adding that prices could hit $1,550 an ounce if the momentum accelerates over the next few months.

But prices could fall back near $1,400 this summer, he warned, as global turmoil abates. "I wouldn't be surprised to see gold lower in June and July."

Over the long term, though, the trend is still higher for gold, according to Sanchez.

"I would be long in the short term, then wait for the dip in prices in the summer to put on some longer positions," he said.