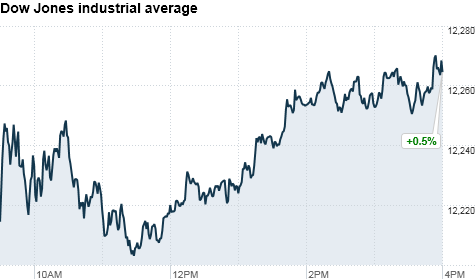 "The market continues to focus more broadly on earnings, which so far this season have been mixed," said Peter Cardillo, chief market economist with Avalon Partners.

Johnson & Johnson (JNJ, Fortune 500) was the top performer on the Dow, with shares rising more than 3.5%, after the company reported better-than-expected sales and earnings. Alcoa (AA, Fortune 500), Caterpillar (CAT, Fortune 500) and DuPont (DD, Fortune 500) were other big gainers.

Shares of Harley Davidson (HOG, Fortune 500) sank nearly 5%, making it the S&P 500's biggest loser on disappointing earnings, while the Nasdaq was weighed down by Seagate Technology (STX), which reported an 82% drop in quarterly profit.

"The start of this earnings season has been one of the poorest in recent memory, but the market seems to be handling it pretty well," said Fred Dickson, chief market strategist with D.S. Davidson & Co.

Investors also focused on commodities, with oil climbing more than $108 a barrel, and gold striking $1,500 an ounce for the first time ever.

Stocks logged their biggest decline in a month Monday, after investors were spooked by the outlook for U.S. debt getting slashed by Standard & Poor's.

Homebuilders rose on the news, with Pulte Homes (PHM) shares rise 5% and KB Homes (KBH) shares up 3% among others.

The trouble with tech stocks

Shares of Intel jumped 5% in the after-market action following the chipmaker's earnings results. Intel reported a profit of 59 cents a share, compared with the 46 cents analysts had expected.

IBM shares rose 4% in post-market trading after the company said it earned $2.41 a share in the first quarter, beating the $2.29 analyst forecast. IBM also lifted its full-year view.

Yahoo! posted a profit of 16 cents a share, besting analysts' results by a penny. Shares of the Internet portal company rose 3% on the results.

Currencies and commodities: The dollar fell against the euro and the British pound, but gained versus the Japanese yen.