Chris Davis: Taking the F-word out of financial stocks 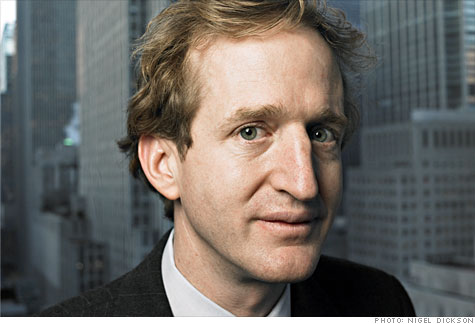 FORTUNE -- As the son and grandson of investing legends, both named Shelby Davis, Chris Davis is to the mutual fund born. He took a few detours -- at various times considering the priesthood and the CIA -- but years ago found his way into the family business. At 45, he's been chairman of Davis Advisors for 13 years and is committed to the tenets laid out by his forebears: He seeks bargain-priced shares of established companies (often financials) and holds them ... and holds them.

Davis manages, with Ken Feinberg, the $34 billion Davis New York Venture fund (NYVTX). It has posted 8.3% annualized gains since 1995 (when Davis took the helm) to beat the S&P's (SPX) 7.3%, according to Morningstar. He acknowledges he has struggled over the past five years, trailing the index by a percentage point per year. As he puts it, "we're taking it in the teeth." But Davis has earned some patience. He explained why he's still buying financials -- and why he believes he's well-positioned for a comeback.

The Fed recently allowed many banks to increase dividends and buy back shares after a second round of stress tests. Is the worst over?

Obviously the headlines are bad, and there's a lot of regulatory uncertainty. What are the characteristics of financial companies that make them attractive to a long-term investor? No. 1 is they're not obsolete-able. Making a spread on money is about the oldest business there is. We like that financials tend to trade at very low valuations. Let's use Wells Fargo (WFC, Fortune 500) as an example. Wells has outperformed the market over the last one-, three-, five-, and 10-year periods. And it trades at eight times earnings. Yet Wells and the other survivors are obviously way better off than they were before the crisis.

You have big stakes in Wells, American Express, and BNY Mellon.

This is a phrase my grandfather used: Financial stocks are the opportunity to buy growth companies in disguise. If a company has the name "financial" in it, it's the F-word. People immediately put a lower multiple on it. So to the extent that people view American Express (AXP, Fortune 500) as a financial company and they view Visa (V, Fortune 500) as a processing brand, Visa trades at a much higher multiple even though a huge percentage of American Express's earnings comes from exactly the same business as Visa's. And American Express is likely to adapt and lead the way when people move to whatever comes after a credit card.

Besides financials, the next biggest chunk of your fund is in energy stocks -- many of them natural gas.

For 40 years oil prices tended to trade at a 7-to-1 ratio to natural gas. Now it's at 25 to 1 because so much natural gas has been found. What we like about gas is it's cleaner, it produces less carbon, and we have huge domestic reserves. The new technology, horizontal drilling and fracking, is a huge opportunity. Now there are risks, right? But there are risks of having oil assets in Venezuela and Libya too.

I think that Occidental Petroleum (OXY, Fortune 500), EOG Resources (EOG, Fortune 500), Devon Energy (DVN, Fortune 500), and Canadian Natural Resources (CNQ) are four of the best-managed companies in energy. Management really, really matters in a commodity company. It doesn't matter if you get the commodity right -- if you get the commodity right, all the stocks are going to go up. But eventually the commodity prices level out. So Exxon's (XOM, Fortune 500) distinguishing feature is capital discipline. The same is true with Devon, EOG, OXY, and CNQ. They all have been very good at growing reserves per share. Very few companies are good at that; they all grow reserves, but they do it by issuing lots of shares and doing acquisitions.

With the problems facing the U.S., why should the next decade be better for stocks than the last?

It's almost certain that the next 10 years will be better than the last 10. That's not saying much. But if you went back to the Depression and looked at rolling 10-year periods, you'd see in every 10 years where stocks produced annual returns under 5%, the subsequent 10 years produced satisfactory returns. The worst was 6.8%, the best was 18%, and the average was 13%. Now, every period is different, and models that look backward are dangerous. But in the last 10 years the earnings of the S&P are up about 50% and stock prices are down. So the earnings yield has gone up, and that's what tends to make the next 10 years better. Not necessarily spectacular, but better.

I understand the S&P 500's valuation looks reasonable because it's trading around 14 times forward earnings. But I keep hearing people like Professor Robert Shiller saying it's way over fair value. So do stocks really look good from here?

The valuation of the average company looks about right. The S&P average looks reasonably valued and very attractive compared to bonds. So what's so great about that? Within that index, there is the valuation of the types of companies that we talked about -- the opportunity to buy way-above average businesses at an average or below average price.

You borrow a phrase from Jim Grant in your annual report, saying bonds offer "return-free risk."

My grandfather called them "certificates of confiscation" because for most of his career people lost a lot of money on them as a result of inflation. I think that a lot of businesses -- like Nestlé or Kraft (KFT, Fortune 500) or Procter & Gamble (PG, Fortune 500) -- have an element of inflation protection because they can raise prices.

You own shares of all three?

Yes. So if their costs go up, they can raise prices. I also say Coca-Cola (KO, Fortune 500). I don't know this for a fact, but I would assume Coca-Cola still makes money in Zimbabwe. If you'd had Zimbabwe bonds, you'd have been wiped out.

You've described your investment in AIG as one of your biggest mistakes and one that reduced your fund returns during the crisis by 6%. You sold all your shares. Now that the stock is down around 98% from its peak, do you find value in AIG?

One of the most important single considerations in investing in a complex financial institution is that the CEO has to serve as chief risk officer and to understand the nature of the risks being taken. It is very hard for somebody who came into AIG (AIG, Fortune 500) two or three years ago to really have a deep handle on procedure, the reserves, nature and risks to take. And it's a very complex company. A lot of insurers are down so we spend a lot of time looking at AIG, but our fundamental concern is with the quality of the ongoing insurance business, and we are having a very hard time getting our arms around that which we wouldn't have had trouble with 10 years ago.

You cut back your position on J.P. Morgan substantially recently. So what's changed at J.P. Morgan?

We are huge admirers of that entire management team. You know people talk about Jamie Dimon, and Jamie Dimon is one of the best managers I've ever met. We've had some redemptions so we had to raise money. And in my view, J.P. Morgan (JPM, Fortune 500) had a relatively fuller value than some of the other financials we owned.

The second reason [we sold shares] was the unanimity opinion about the quality of the company. Our feeling was that there is always the risk of the change in perception when everybody thinks it's great.

Okay, so what are you absolutely avoiding now?

That is a big question. I don't know. I study the way ETFs have exploded, where there are a lot of people that are making a lot of money on ETFs. To me index funds for long-term investors are going to add real value. ETFs where you trade them intraday, or you can rotate sectors -- I think these are very dangerous. Even though that doesn't directly affect the investments that we look at.