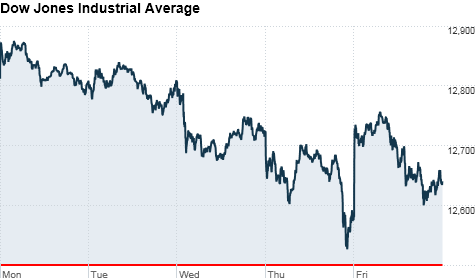 Despite Friday's modest gains, all three indexes closed down more than 1% this week in the wake of falling commodity prices and mediocre economic data.

On Friday, stocks eased off the session's highs after the German magazine Der Spiegel reported that Greece was considering abandoning the euro.

The news sent the euro down more than 1.1% against the dollar. The dollar also gained strength against the Japanese yen but fell versus the British pound.

While it's unlikely that Greece will actually abandon the euro, it's something investors will monitor closely.

"It would be very difficult for Greece to leave the euro, especially since the Greek bailout package was created for the purpose of keeping them in the eurozone," said Peter Maris of Resource Financial Group.

The Dow had been up as much 175 points as U.S. investors cheered a much better than expected jobs report.

"Everyone was looking for this economy to find some footing, and they found it in today's jobs numbers," said Anthony Conroy, head trader at BNY ConvergEx.

Commodities: Investors continued to focus on oil, gold, and silver prices, following big declines posted earlier this week. The sell-off in the euro pushed oil and silver prices down even further.

After 44 straight days of increases, the national average price for a gallon of regular unleaded gasoline decreased 0.1 cent Friday, according to AAA. The average price is now $3.984 a gallon.

Companies: Insurer AIG (AIG, Fortune 500) late Thursday reported a loss from continuing operations of $1.41 per share for the first three months of the year, compared to a profit of $2.16 per share over the same period a year ago. Despite the weak earnings report, shares of AIG fell 0.3%.

Shares of Citigroup (C, Fortune 500) rose 1% ahead of the finalization of company's reverse-stock split. Citi shareholders will get one new share for every 10 shares they currently own.

Bonds: The price on the benchmark 10-year U.S. Treasury rose Friday, pushing the yield down to 3.14%.