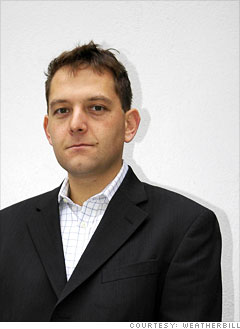 Friedberg was one of the first to leave Google for a shot at the startup life. His new company - which has raised a total $17 million since 2006 - is an online weather risk management service that sells insurance policies to protect against snowstorms, crop damage and other environmental hazards. Based in San Francisco, WeatherBill recently opened an office in Boston and has already inked deals with Canadian travel site itravel2000.com and various agriculture interests. Says Friedberg, who worked at the search engine for three years before leaving to start WeatherBill: "Obviously there was a lot to be learned at Google."