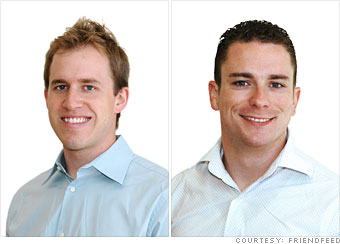 For Taylor, 27, starting a company with his friend Norris, 26, was a no-brainer. They took comp sci classes at Stanford together, lived together, worked at Google together, and created Google Maps together. Why stick with Norris? "He's smarter than I am," Taylor says. "He's a genius engineer." The friends left Google in June (on the same day, naturally) to start their own company developing storage technology. They both quickly grew bored with the project and decided to launch FriendFeed with fellow ex-Googlers Paul Buchheit and Sanjeev Singh. "On a high level, our company is interested in finding social solutions to problems," Taylor says. "That's something I learned from [Google co-founder] Larry Page. At Google, I learned to go after big, intimidating projects because that's what is worth solving."

NEXT: Salman Ullah and Sean Dempsey