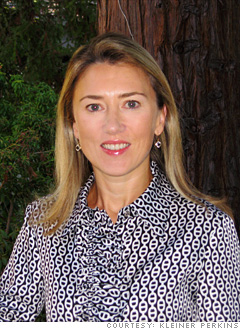 What was the "a-ha moment" that led you into tech?
In 1991 I was working at Heidrick and Struggles in London and watching the innovation and growth of Apple Europe. I was so struck by the contrast of innovation against the backdrop of the U.K. recession that I persuaded the firm to let me move to the U.S. and work in the Menlo Park office. The rest as they say, is history.

What has been your most radical career shift, and how risky was it?
It was actually going to Kleiner Perkins. While on the surface it was a no-brainer move, I was departing from Ramsey Beirne, a firm that I had really contributed to building. I hired the team. I was also the most significant impact player in the firm -- I booked the most revenue in 1999 and beginning of 2000, and I knew that my departure would not be well-received. Additionally I was betting on my Kleiner Perkins partners, that they would truly embrace me, the firm's first senior female partner hire, who was neither investor nor staff but a partner who would spend her every moment thinking and building for the leadership of the portfolio and firm. Would this really work when every other firm had gotten the model wrong?Eight years later, I can wholeheartedly say the model has worked and the credit goes to my partners, particularly John Doerr who is such a passionate advocate for great leadership. Also, people like Bill Campbell, Scott Cook, and Eric Schmidt have been incredibly instrumental in embracing what I do.

What technological advance are you most excited about?
Evolution in materials science and chemistry that is allowing for such immense innovation in green tech.