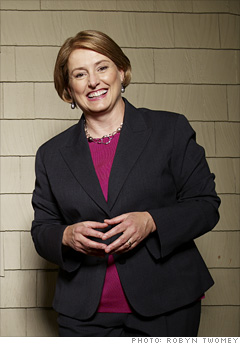 What was the "a-ha moment" that led you into tech?
In the late 1990's, it was all about technology for technology's sake, especially in Silicon Valley. But to me, true innovation is making products that change people's lives. That was my grounding at GE, and it has stayed with me throughout my career. So when the bubble burst, I got into technology with a real operational mindset. I knew that what Silicon Valley needed was businesspeople to transform pure technology ideas into sustainable long-term businesses.

What has been your most radical career shift, and how risky was it?
Leaving GE and the east coast for Intuit was pretty radical for me. I went from an enormous B2B global company (where I had known many colleagues for 20 years) to a mid-sized consumer products company on the West Coast where no one knew me (or cared about my background). Every single dimension of my life changed with that move. That's one way to shake things up!

What was your toughest day, and what did you learn from it?
When I was at GE, I had to close a poorly performing business that was made up mostly of single moms who didn't have a lot of other career options in a small rural town. It was incredibly disheartening for me personally, but it taught me that leaders have to make tough calls sometimes, and those calls have to be based on what's right for the health of the business. Otherwise, you're doing no one a favor -- not the business, its customers, its shareholders or even its employees.