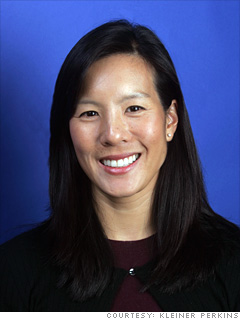 What was the "a-ha moment" that led you into tech?
Reading an article in high school that young women were increasingly becoming "scientifically illiterate." It said the number of females pursuing educations and careers in technology, math and science, despite their intellectual capabilities, was at an alarmingly low level. I realized I was starting to head down the same path -- I really liked technology and was good at math, but was not pursuing it, probably because most of my girlfriends were taking French.

What has been your most radical career shift, and how risky was it?
Taking time off as a partner at Kleiner Perkins to be founding CEO of Danoo (a digital media company backed by KP) could probably be viewed as risky. But the opportunity to get `back in the trenches,' build a team, evangelize and establish a meaningful new business, feels great. This is what our business is all about. When I return to KP, I should be much more current -- and more helpful to entrepreneurs, because I've been there too.

What technological advance are you most excited about?
Technology that makes information and entertainment more relevant and easier for people to access, Like Danoo, and the iPhone. And cost-competitive, scalable, clean energy generation like thin film solar, solid oxide fuel cells and biofuels.