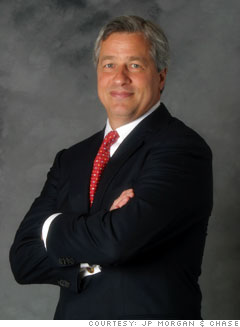 After Paulson and Geithner left the executives to contemplate what they could do to keep the world's markets from collapsing, the assembled alpha males began talking about Merrill Lynch in front of Thain. "Merrill could be the next to go," one participant said. A few minutes later, Thain got up and left the room, focused on negotiating a deal with Bank of America.

After Thain left, John Mack, the CEO of Morgan Stanley, spoke up. "Maybe we should let Merrill go down too," he said, according to several sources who were there.

Aghast, Jamie Dimon, the CEO of JPMorgan Chase, responded, "John, if we do that, how many hours do you think it would be before Fidelity would call you up and tell you it was no longer willing to roll your paper?"

The group began to put together what became an agreement that every firm in the room would continue to do business with every other firm in the room and would create a multi-billion credit facility for the firms to use in an emergency in the wake of the presumed Lehman bankruptcy. "We figured all hell would break out the next day," one banker said.