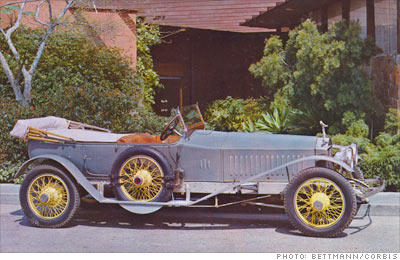 In 1904, engineer Henry Royce and salesman Charles Rolls began selling chassis and engines setups for custom coaches. The car ran remarkably quietly, earning it the nickname the Silver Ghost as early as 1907. (The original 1907 Silver Ghost was recently insured for $35 million, a figure that makes it almost certainly the world's most valuable car.)

More than any other make, the Rolls was designed not for the pleasure of the driver -- who was usually in the owner's employ -- but for the comfort of the passenger. Backseat luxury was best exemplified by '50s-era models such as the Silver Cloud.

Thanks to its airplane business, Rolls-Royce avoided going under in the Great Depression when it absorbed Bentley Motors. The company was nationalized in 1971, and the Motors division was resold in 1980. VW thought that it had bought both brands in 1998. But while it controls Bentley and some Rolls trademarks, the actual Rolls name was quietly sold separately. VW now makes Bentleys, like the Continental Flying Spur, with trademark Rolls features like the wire mesh grill; BMW makes Rolls that look like unassuming limos used by British foreign intelligence.