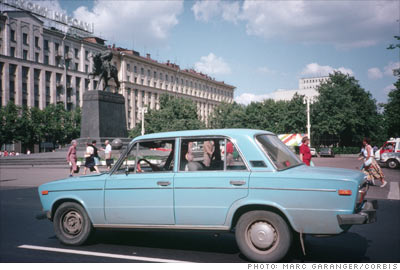 The Soviet Union was never a key figure in automotive history: The country's most famous brand, Lada, didn't start producing cars until 1966 -- its first effort was a collaboration with Fiat, and the company town, in gratitude, renamed itself Togliatti after the longtime chairman of the Italian Communist Party.

The car was intended to be the Russian answer to the VW people's car, and its Soviet virtues -- rugged Siberia-proof setup, mechanic-friendly power train -- made it a big seller nearly everywhere in the world except the U.S., where there were political incentives not to buy the Kremlin's most valuable export.

The car was woefully underpowered: In The Bourne Supremacy, portions of the Moscow chase scene that featured Lada police cars had to be shot against a background of parked cars to give the appearance of speed. The brand is still state-owned, under the Russian Technologies banner, but has partnered with Renault, which makes it now part of the world's third-largest multinational auto company, the Renault-Nissan-Lada group.