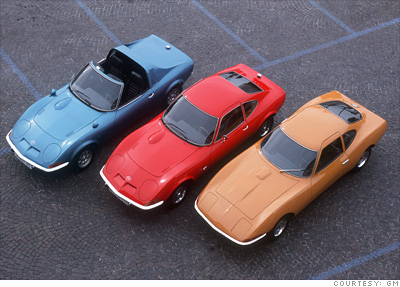 Over the course of two World Wars, Opel saw its production facilities devastated, sold to GM, nationalized by Nazis, devastated again, resold to GM, then rebuilt slowly, until -- by 1972 -- it reclaimed its position as Germany's leading car manufacturer. The secret to Opel's longevity seems to lie in reliability and affordability rather than comfort or design.

Opel has many makes -- Astra, Vectra, Manta, Corsa, Cyprus, Tigra, and so on -- but only the Opel GT has come close to stardom: It played the car belonging to bumbling spy Maxwell Smart in Get Smart -- a role it only got in the series' fifth and final season in 1970. The company has become a point of contention lately; just days before GM filed for bankruptcy, a deal was all but completed to sell the company to a consortium led by 76-year-old Frank Stronach, a native Austrian who made his money supplying auto parts to U.S. carmakers. Currently, GM is seeking to retain the company, which may not be able to survive without help from a German government that has expressed strong displeasure at GM's recent flip-flop.