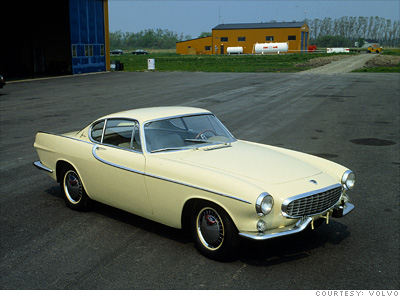 Volvo was funded in part by a Swedish ball-bearing company (the name is Latin for "I roll") before becoming independent in 1935.

The company favored automobiles of sturdy construction that could withstand the Scandinavian winters, and it pioneered numerous safety features, like side airbags, rear-window brake lights, and the three-point harness -- creating a reputation that led the National Highway Traffic Safety Administration in 1976 to buy a fleet of Volvos that it used to set national safety standards in the U.S.

Volvo engineers generally overlooked matters of style in their quest for safety -- except in the case of the P1800, a snazzy design that was adopted as the car of choice on the TV series The Saint, which featured Roger Moore playing the polyglot thief Simon Templar.

In 1999, the company was bought by Ford, where it evolved into more of a luxury brand, competing with the likes of Audi and BMW. Recently, at least two Chinese manufacturers -- state-run Beijing Auto Group and privately held Geely Automobile Holdings -- have expressed interest in buying Volvo from Ford. The current price is rumored to be $3 billion, $3.5 billion less than Ford paid for the company.