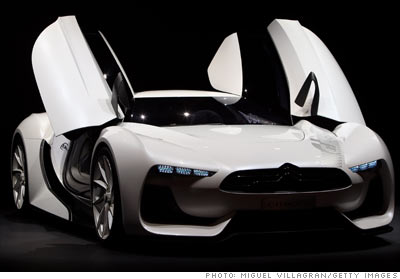 Andre Citroën turned a French gear company he founded in 1913 into a weapons supplier and then, in 1919, into an innovative automobile company. Citroen pioneered front-wheel drive, or "traction avant," in 1934; created half-track off-road vehicles (lovely coaches with tank treads that could -- and did -- cross the Himalayas); and fashioned the world's largest ad, lighting up the Eiffel Tower with 125,000 light bulbs that spelled out the company name.

The company was taken over by Michelin in 1934 -- reputedly due in no small part to the owner's large baccarat debts -- then sold to Peugeot in 1976. Though Citroens are still sold nearly everywhere on Earth, the cars remain unavailable in the U.S.; the company couldn't alter its bumper construction to meet U.S. safety standards in 1974, and it hasn't bothered to return since.

Despite this refusal, the DS -- Citroen's most famous model with its elegant design and unique "hydropneumatic self-levelling suspension" -- has remained a favorite of collectors, who have made it one of the most valuable vintage automobiles. Although the company barely changed the design of the DS during its entire production run, from 1955 to 1975, Citroen has recently shown a renewed interest in experiments, introducing a concept car, the Citroen Gran Turismo, developed in conjunction with a Japanese video game company.