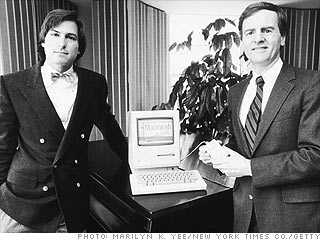 Jobs with John Sculley
April 11, 1985
Jobs knew that Apple needed adult supervision, and in 1983 he recruited John Sculley (the PepsiCo marketing wunderkind who created the Pepsi Challenge) with the famous line: "Do you want to spend the rest of your life selling sugared water or do you want a chance to change the world?"

Each man thought he could learn a lot from the other, but with Mac sales languishing and Jobs growing increasingly disruptive, their relationship soon soured. Matters came to a head at a board meeting that lasted nearly 24 hours in which each tried to oust the other. In the end, the board sided with Sculley. Jobs was stripped of all operational responsibility and banished to an outbuilding he called Siberia. Five months later he tendered his resignation.