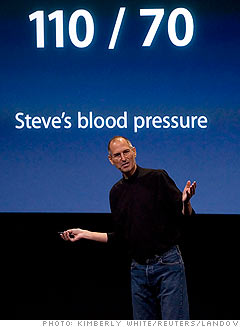 July 31, 2004
In Oct. 2003, doctors doing a routine abdominal exam on Jobs discovered a rare but treatable type of malignant tumor in his pancreas. After pursuing alternative therapies for nine months, Jobs entered Stanford University Medical Center in late July, 2004, where the tumor was removed -- along with part of his pancreas, his gallbladder, part of his stomach, the lower half of his bile duct, and part of his small intestine.

In a memo to the staff he pronounced himself "cured," but four years later he began rapidly losing weight. In a second memo last January he said that he had an easily treated "hormone imbalance." The next week he announced that he was taking a six-month medical leave to deal with health-related issues that had turned out to be "more complex" than he initially thought.

In June, it was reported that while on medical leave, Jobs had received a liver transplant. According to doctors at University Hospital in Memphis, where the surgery was performed, he is "recovering well" and has an "excellent prognosis."