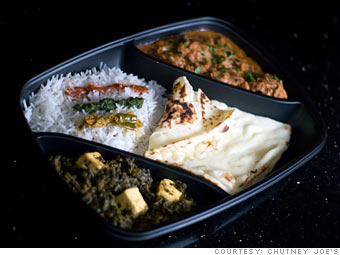 Origins: U.S., via New Delhi, India
U.S. stores: 1
Where: Chicago
In one sense, Chutney Joe's started in New Delhi many years ago. Founder Vijay Puniani's first business was a restaurant in that city. But after coming to the U.S., Puniani, 56, switched to real estate. Now, after retiring and building himself a $100,000 kitchen, he's ready to start all over again.

Experimenting with healthier (no frying, no butter, no heavy cream) and standardized recipes for Indian food, he believes he's found a way to bring Indian cuisine to fast-food America in the same way that Chipotle brought Mexican.

"The problem with Indian food is that there is so much complexity in the cooking," he says. "But when talking about a chain, consistency is paramount. That's what I've been able to do with samosas, chicken tikka masala, and other favorites."

His first restaurant, in downtown Chicago, opened earlier this year. "I knew it was a success when customers from Bombay said I should bring it over there," says Puniani.

He plans five more in Chicago in the near future and is in the very early stages of scouting in New York, Dallas, Atlanta, and Los Angeles.