How Obama wants to transform your finances

Our financial system allowed Wall Street to take on too much risk. Consumers were overwhelmed by too much complexity. Can the President restore some balance? 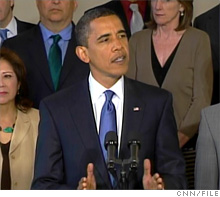 (Money Magazine) -- Most of the big things Barack Obama hopes to get done - health-care reform, slowing climate change - would have a big economic impact over the long run. But the administration's plan to reshape financial regulation, outlined in an 88-page Treasury report in June, could have an immediate effect on your wallet.

Much of the attention has been on how the plan would reshape the inner workings of Wall Street, but some of the Obama team's biggest ideas are about consumer finance - how you invest and borrow. The President won't get everything he wants (banks are gearing up to fight him), but with Democrats running Congress, he may get a lot. Let's answer some key questions about what that means for you.

Could these reforms prevent another crisis?

The answer may depend on the main cause of the crash - and that's still being debated. There were two sides to the problem. First, banks borrowed heavily and laid down a big bet that housing prices would never fall. On the other side, consumers lined up for the dangerous mortgages that financiers churned out and invested in.

To the extent that bankers' taste for risk is to blame, Obama's plan feels soft. There's some reorganizing of regulators, and a new oversight council would watch out for "systemic risks" - for example, under-funded pension plans buying risky derivatives issued by overstretched insurers trading with highly leveraged banks.

The Federal Reserve would get new powers as the ultimate enforcer. But market strategist Barry Ritholtz, author of Bailout Nation, says Obama's plan does little to address two big dangers. First, it "leaves in place key enablers of the meltdown - the ratings agencies that took those junk mortgages and rated them triple A," says Ritholtz. And it doesn't specifically stop firms from growing "too big to fail."

Obama's proposals, however, look a lot tougher and smarter on the consumer half of the equation.

Will things like pick-a-payment mortgages and credit cards with 32% rates be outlawed?

Not explicitly. Instead, the administration proposes a new Consumer Financial Protection Agency (CFPA), which could nix financial offerings it deems unfair or likely to get borrowers into trouble.

For example, it might limit prepayment penalties on mortgages, which can lock people into a loan as their adjustable-rate payments spike. Or it could stop banks from automatically rolling customers into costly "overdraft protection" loans. Or regulate mortgage brokers' sales practices. Maybe it would even ban outright some kinds of mortgages - like the ones that let borrowers make any payment they like while their home equity dwindles.

One obscure-seeming provision actually marks a huge shift toward giving regulators sharper teeth. The CFPA would set the floor on regulation, not the ceiling. So states could set even tougher rules.

Do I need the government telling me what kind of loan to take out?

You probably don't. Most Americans, after all, still pay their mortgages and credit card bills on time. One argument against regulation is that while it may shield some people who don't read a contract carefully, it can also kill financial products that might benefit a more savvy consumer.

"If regulations are over-restrictive, they could hurt some people they were intended to protect," says law professor Omri Ben-Shahar of the University of Chicago.

But that cost has to be weighed against the disaster that's unfolded. Responsible borrowers today can't sell their houses if their neighborhoods are pocked with foreclosures.

And the Obama plan isn't just about banning things. It may actually allow a lot of risky stuff while guiding most borrowers toward the safety of a set of new plain-vanilla products. For example, it suggests that every mortgage lender would have to sell a loan with predictable payments, standard documentation (no "liar loans" here), and zero pre-payment penalties. Since plain-vanilla loans would all have the same basic terms, they'd be easier to compare, forcing lenders to compete simply on rate.

And you wouldn't have to scour the contract for hidden traps. "Warning labels are everywhere now, but the information is technical and hard to understand," says Ben-Shahar.

To get a more complex loan, you'd have to sign extra forms acknowledging that you were taking an "alternative" or "higher cost" product. In effect, the government would be putting big red warning flags on those loans.

What about protecting my investments?

The new consumer watchdog would regulate loans and financial products. Investment firms would still be overseen by the Securities and Exchange Commission. (Yep, the same crew that missed the Madoff scheme.)

But there's one significant change on the table. The administration wants stockbrokers to be fiduciaries. Translation: They'd be legally required to put your interests first. Thought that was already true? Nope. Today they're generally required only to sell something "suitable," which gives them plenty of room to steer you toward investments that their firm is flogging or that pay better commissions.

"When you talk to your broker today, you're talking to a salesperson," says Yale economist Robert Shiller.

Will money markets be safe again?

One of the most horrifying moments of last year came when a large money-market mutual fund lost principal because of investments in Lehman Brothers loans. These funds are supposed to be a safe place to put your cash, usually at a better yield than a bank account. Although money-market funds aren't FDIC-insured, they are supposed to be so conservatively invested that they might as well be.

When that turned out to be wrong, the government stepped in with a temporary guarantee to prevent a panic. Obama isn't proposing to extend that backup, but he's asking for tougher rules to ensure that money-market funds buy only the safest stuff.

The crash hit retirement accounts hard. Any fixes for that?

To the extent that the new rules can restore faith in the markets, your investments will have an easier time recovering. But the only way the reforms specifically address retirement is by recommending an automatic IRA plan for people who don't get retirement plans at work. Employers would have to automatically enroll their workers in a direct-deposit IRA. Workers would be allowed to opt out.

More notable is what the administration isn't saying. There are no proposals to craft a system that depends less on individual savings, as many retirement experts advocate. It mentions only in passing high 401(k) fees and the trouble retirees have converting savings into income. But more ideas may be on the way. "This is only Act I," says the Heritage Foundation's David John, a leading auto-IRA advocate. "Acts II through VII are coming."

Protect yourself from a credit card backlash