But overall, any wrongdoing is likely to play a small part in soaring crude prices. Meanwhile, speculators aren't expected to hang. 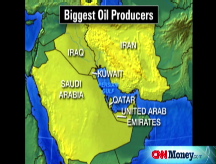 NEW YORK (CNNMoney.com) -- Amid soaring oil prices that some say are caused by nothing more than rampant speculation, the government Thursday announced a wide ranging probe into oil price manipulation and said it would get more information on the effect investors are having on the market.

The measures, undertaken by the Commodity Futures Trading Commission after pressure from angry lawmakers, do two things.

First, they'll attempt to gather more information from index funds and other non-commercial users of oil. They'll also seek information on oil trades made outside the U.S. on exchanges like the IntercontinentalExchange Europe (ICE) where the CFTC has no oversight and has been unable to get more detailed information.

The second thing on the CFTC's agenda is an actual investigation into possible price manipulation - most likely by a commercial user of oil like a production company, shipping company, or storage company.

Recent investor interest in commodities is an issue of intense debate. Some say investors, who have been funneling money into oil and other commodities over the last several months amid rising inflation and falling stock prices, are unjustifiably driving up the price of oil and gas simply because they have no other place to put their money.

Others say tight supply and strong demand are the real reasons behind this investor interest, and the market is functioning properly to limit demand and increase supply.

CFTC has previously said that it has not found any evidence that speculators were artificially inflating prices.

"Data used by Commission staff show that price changes are largely unrelated to fund trading," according to written testimony before a Senate hearing earlier this month by CFTC Chief Economist Jeffrey Harris. "Broad-based manipulative forces are not driving the recent higher futures prices in commodities across-the-board."

Neither Harris nor any other economist at the CFTC could not be reached for comment.

According to a chart presented in its congressional testimony, it appears the CFTC used data from 2007 to reach its conclusion.

Additional reporting by index funds and other non-commercial buyers of crude will help CFTC make better analysis, said Michael Haigh, head of U.S. commodities research at the investment bank Société Générale and a former economist at the CFTC.

Even so, he doesn't expect the CFTC's overall conclusion - that investors aren't unjustifiably driving up oil prices - to change much.

More regulation on the way?

But Haigh said oil traders see this request for additional information as perhaps a precursor to broader regulation, like decreasing the amount of contracts speculators are allowed to hold or raising the amount of money investors have to put down to buy those contracts.

"The fear that this might happen may drive people out of the market," he said. "There could be a run for the gates."

Oil prices fell Thursday by over $4, one of the biggest declines in recent weeks. One expert attributed the slide to the investigation.

"The traders now know that someone is looking over their shoulder," said Michael Greenberger, a professor at the University of Maryland and a former CFTC official. "Their phony sales are being watched, and in one day there was the biggest drop in 2 1/2 months."

If there is a run for the gates, Haigh said prices may or may not fall, but liquidity would be reduced, leaving the market more vulnerable to manipulation by a single participant.

And that's the second thing the CFTC is looking into - "practices surrounding the purchase, transportation, storage, and trading of crude oil and related derivative contracts," the agency said in a statement.

This most likely means manipulation of the physical oil market, not typically done by speculators but rather by commercial players who might literally withhold oil from the market in an attempt to drive prices higher.

The CFTC has found evidence of this in the past. BP recently settled a suit that alleged the company tried to corner the propane market to inflate prices in 2003 and 2004. BP agreed to pay a $303 million settlement.

Haigh thinks it's likely CFTC will find evidence of this again given that the agency has been investigating for six months and has now chosen to make it public. But he stressed that a single player acting alone would in all likelihood not have a huge influence on prices.

He believes the CFTC took the unusual step of announcing the investigation to placate angry lawmakers who may be tempted to enact broader regulations on the oil futures market that would hamper trading.

One analyst said the CFTC investigation will have little effect.

"This investigation is just a way for the government to divert attention away from the fact that it hasn't created a viable energy policy," said Mike Fitzpatrick, an analyst at the brokerage MF Global in New York. "Ultimately, fundamentals rule the markets...this investigation is going to wind up producing nothing."

Not everyone agrees fundamentals rule the market.

"There is a theory that the price of crude oil is being driven up not by supply and demand principles, but by speculators using what are called dark markets, markets that can't be watched by the public or regulators, to manipulate the price of crude," said Greenberger.