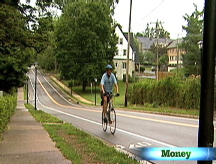 NEW YORK (CNNMoney.com)  -- In what seems to be a perverse reaction to high gas prices, some cities are cutting back on public transit - at a time when their citizens need it most.

Due to skyrocketing fuel costs local governments are being forced to trim all sorts of services - not only busses - but police departments and road repair crews too.

The Montana Highway Patrol, after failing to find enough police recruits, is using $300,000 that had been set aside for more officers to pay the gas bill instead.

"They're not going to fill positions because they don't have the dough," said Ronald Reucker, president of the International Association of Chiefs of Police. "It'll mean more speeding, more drunk drivers, and more fatal crashes."

In a recent gas price survey by the National Association of Counties, 81% of counties responding said public safety was the area most impacted by high gas prices. Nearly half said reducing the number of vehicles in the county fleet are among steps being considered.

In the public safety area, Reucker said police departments with lots of miles to cover - like highway patrols or sheriff departments - would most likely feel the pinch.

Since voters are highly protective of public safety, he's only heard of a handful of departments that have actually reduced services, he said.

Less lucky are city bus departments. That may seem like tough love in a time when high prices are causing more and more people to take public transit. But in Cleveland and other cities across the country, that's exactly what's happening.

"We're planning on laying off some staff and cutting some routes that are poor performers," said Jerry Masek, a spokesman for the Greater Cleveland Regions Transit Authority. "People will still have service, but not as much."

"You just can't absorb that without doing something," said Masek. He didn't know how many bus lines would be cut, and said a combination of fare hikes could spare some neighborhoods.

"[Riders] would rather pay more than lose service," he said. "No matter how much we raise fares, it's still cheaper than driving."

And undoubtedly easier on your car, especially if the road repair crew is in a situation like New Jersey's.

It's not the cost of driving those big dump trucks that's straining the budget at the New Jersey Department of Transportation. It's the price of paving.

What many people don't know is that asphalt is made largely from oil. It's the heavy oil at the bottom of a barrel that can't be refined into gasoline, diesel, jet fuel or other lighter products. And it's risen in price right along with gasoline.

The price for the main component in asphalt has jumped nearly 90 percent since last year, according to Erin Phalon, a spokeswoman for the transportation department.

"This puts us in a bind," she said. "It could mean future projects are scrapped or downsized."

Awash in oil money, and problems