But losses are pared in half after Dow drop reaches 800 points on credit crisis.

Who will buy Wachovia? 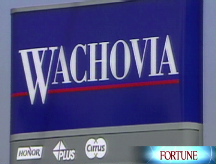 More Videos
When will stocks bounce back? 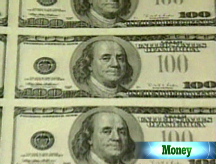 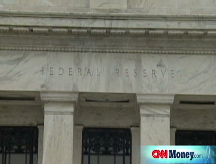 NEW YORK  (CNNMoney.com) -- Stocks plunged Monday, with the Dow down as much as 800 points during the session, as the $700 billion bank bailout plan and European government attempts to prop up faltering banks failed to comfort panicky investors.

But the Dow Jones industrial average (INDU) and other major indexes cut losses in the final hour. The Dow ended down just short of 370 points.

Other indexes also cut losses in the final hour.

Investors across the board are realizing that the $700 billion U.S. bank bailout was not a cure-all, said Dan Genter, president and CEO at RNC Genter Capital Management. The package involves the Treasury buying bad debt directly from banks in order to get them to start lending to each other again

"Everybody thought that the bailout was a panacea. But it's not, it's a tourniquet that stops the bleeding so the patient doesn't die right away," Genter said.

The plan could end up doing what it's meant to do, but there's a lack of trust in Congress' ability to do this, said Scott Armiger, portfolio manager at Christiana Bank & Trust Company.

"People just don't have faith that the government can get us out of this," he said.

The spate of European bank rescues underlined the global nature of the crisis.

"It looks like panic capitulation, but there's no telling how long it will last," Halliburton said. "The concern is that we will roll into a very severe recession or even a depression."

A CNN/Opinion Research poll showed that nearly 60% of Americans think a depression is likely. (Full story)

A measure of investor fear surged, with the CBOE Volatility index (VIX), or the VIX, at a 19-year high.

The rise shows fear on a short-term basis is rising, but not enough to signal a stock market bottom is forming, said Todd Salamone, senior VP of research at Schaeffer's Investment Research. "Fear is getting higher, but it's not at panic levels that have implied major market bottoms in the past," he said.

Also after the close, Bank of America (BAC, Fortune 500) reported a steep drop in profits that was short of estimates. The bank also cut its dividend and said it will raise $10 billion through a stock sale. Shares fell 3% in extended-hours trading. (Full story)

President Bush said Monday that the purposed of the package was to loosen up the nation's credit markets to "get money moving again."

However, Bush said "it's going to take a while," for the program to start working.

"We don't want to rush into the situation and have the program not be effective," he said.

While the package should help in the longer run, it won't loosen up credit markets in the short term, analysts said. With cash still scarce, investors remained on edge.

"Purchases that require financing are extremely difficult to pull off currently and that's going to have a severe impact on the economy," said Tradition Capital's Halliburton.

The Federal Reserve attempted to address this Monday by making an additional $300 billion available to banks in return for a broad range of damaged assets. That raises the amount available to banks to $600 billion as of Monday and the Fed could expand that to $900 billion by the end of the year. (Full story)

French BNP Paribas said it would buy 75% of troubled Fortis' Belgium bank after a government bailout failed to reassure investors.

European Union banks are in the process of devising a broader rescue strategy, although they have indicated that it would be on a smaller scale than what was seen in the United States.

Global markets tumbled, with Asian and European stocks posting big losses. Russia's main market was shut down twice before closing with a loss of 20%. (Full story)

The difference between the 3-month Libor and the Overnight Index Swaps rallied to an all-time high of 2.94% before pulling back. The Libor-OIS spread measures how much cash is available for lending between banks and is used by banks to determine rates. The bigger the spread, the less cash is available.

The TED spread, which is the difference between 3-month Libor and what the Treasury pays for a 3-month loan, briefly hit an all-time high of 3.95%, before pulling back a bit.

The yield on the 3-month Treasury bill, seen as the safest place to put money in the short term, fell to 0.44% from 0.49% late Friday, with investors willing to take a slim return on their money rather than risk stocks. Last month, the 3-month bill skidded to a 68-year low around 0%.

Long-term government debt prices gained and the yields slipped. The benchmark 10-year Treasury note rose 1-8/32, lowering the corresponding yield to 3.45% from 3.60% Friday. Treasury prices and yields move in opposite directions.

National City (NCC, Fortune 500) plunged 27% after Fitch cut its debt rating. The company's survival has been in question of late amid the ongoing pressure for the sector.

Oil and gold: U.S. light crude oil for November delivery settled down $6.07 to $87.81 a barrel on the New York Mercantile Exchange.

Other markets: In currency trading, the dollar hit a 14-month high versus the euro and fell sharply versus the yen. (Full story)

The price of gas decreased for the 19th consecutive day, according to a survey of credit card activity.