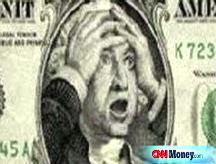 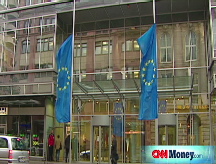 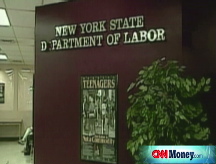 NEW YORK  (CNNMoney.com) -- U.S. stocks tumbled Wednesday at the end of a volatile session in which investors considered the Federal Reserve's emergency interest rate cut but remained wary about the economic outlook.

After the close of trade, the Fed said it will give AIG (AIG, Fortune 500) a loan of up to $37.8 billion on top of the $85 billion it gave it last month to help the insurance giant avoid bankruptcy.

The major gauges seesawed throughout the session, with the Dow down as much as 252 points and up as much as 180.

"The volatility is just ridiculous these days," said John Forelli, portfolio manager at Independence Investments. "The market reaction to these developments can change hour-to-hour."

Investors welcomed the Fed's emergency rate cut, coordinated with central banks around the world, but remained gloomy about the outlook for the economy.

Forelli said that people are aware that the economy is getting weaker in the near-term, and that the Fed and the Treasury are going to do whatever they can to help calm financial markets. But that's not enough of a reason for investors to jump back into stocks, he said.

The rate cut was the latest step taken by various government agencies over the past week in an attempt to get banks to start lending to each other again. The Dow has lost nearly 1,600 points in the past week and the three major stock gauges have fallen to five-year lows as panicked investors have fled stocks.

"The stock market is catching up with credit markets and the credit markets are indicating major problems out there," said Joshua Shapiro, chief U.S. economist at Maria Fiorini Ramirez Inc.

The Fed cuts rates: The central bank, in coordination with banks around the world, said Wednesday that it is cutting the fed funds rate by half a percentage point to 1.5%. The fed funds rate is a key short-term lending rate that impacts loans on credit cards, home equity lines and business loans. The Fed also cut the discount rate, a bank lending rate, by half a percentage point. (Full story)

Wall Street had been expecting the Fed to do just what it did so there was no surprise factor, said Shapiro.

The cut follows several dramatic moves on the part of the Fed to loosen up credit markets, which businesses depend on to function day-to-day. The absence of ready capital has hurt the broad financial system and consumers who can't get loans.

On Tuesday, the Fed said it will buy directly from businesses short-term debt that companies use to finance daily operations. On Monday, it said it will make $300 billion available to banks in return for damaged assets, on top of $300 billion already available. And Congress approved the $700 billion bank bailout plan last Friday, allowing the Treasury to buy bad debt directly from banks.

But despite all these developments, the stock market has remained under pressure.

"Equity markets are saying that any beneficial effect from these programs is down the road and the next six months are going to be terrible," Shapiro said.

Speaking in the afternoon, Treasury Secretary Henry Paulson said that while markets are still strained, the government will use all of its resources to ensure stability in the financial system. (Full story)

(Here's what else the Fed can try)

The yield on the 3-month Treasury bill, seen by many as the safest place to put money in the short term, slipped to 0.63% from 0.69% late Tuesday, indicating investors are willing to take a very small return on their money. Last month, the 3-month bill skidded to a 68-year low around 0% as panicked investors fled stocks.

The TED spread, which is the difference between what banks pay to borrow from each other for 3 months and what the Treasury pays, rallied to an all-time high of 4.02 percentage points before retreating to 3.89.

Libor, the overnight bank lending rate, spiked to 5.38% from 3.94% the previous day. However, the rate was set ahead of the Fed rate cut.

The Libor-OIS spread, a measure of cash scarcity, rose to a record 3.22% from the record 2.97% reached Tuesday. The spread shows how much cash is available for banks to lend and is used by them to set lending rates.

Company news: Financial stocks slumped in the last hour of the session, erasing afternoon gains and dragging down the broader market.

Citigroup and Wells Fargo (WFC, Fortune 500) agreed on Wednesday to extend the legal standstill in their battle for control of Wachovia.

Bank of America (BAC, Fortune 500) gave up an afternoon recovery attempt sparked by news that it will buy back as much as $4.7 billion in auction-rate securities to settle fraud charges.

The stock lost 26% Tuesday after the company reported weaker profits that missed estimates, cut its dividend and said it will need to set aside money for bad loans through the next year.

Retail sales: Consumers bought essentials at discount prices in September, and not a whole lot else, according to the latest monthly sales reports from the nation's chain stores.

Also in the mix on Wednesday: a surprise rise in the August pending home sales index, as companies bought up repossessed homes on the cheap.

Global markets: Markets overseas tumbled again Wednesday, with Japan seeing one of its worst days ever as the Nikkei slumped 9%. European markets slid as well, despite the coordinated central bank actions. (Full story)

Oil and gold: U.S. light crude oil for November delivery fell $1.11 to settle at $88.95 a barrel on the New York Mercantile Exchange on continued bets that the slowing global economy will hurt demand. (Full story)

Other markets: In currency trading, the dollar slipped against the euro and the yen. (Full story).

The price of gas decreased for the 21st consecutive day, according to a survey of credit card activity by motorist group AAA.

The accounting rule you should care about