Crude ends day at $64.15 after cartel cuts production by 1.5 million barrels a day. 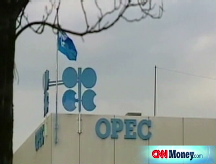 NEW YORK (CNNMoney.com) -- Oil prices fell Friday to their lowest point since May 2007 as investors were unimpressed by a decision from the world's largest oil cartel to slash production targets.

The Organization of Petroleum Exporting Countries, whose member nations control about 40% of the world's oil, said it would cut production by 1.5 million barrels a day starting in November in order to keep oil prices from falling further. But many investors had been looking for something much larger.

"(OPEC) had a chance here to either help the world economy, or help themselves, and they did neither," said Peter Beutel, oil analyst with Cameron Hanover.

OPEC cut: OPEC said the cut was necessary because the global financial crisis has caused oil demand and prices to plummet.

"The financial crisis is ... dampening the demand for energy, in general, and oil in particular," said OPEC in a statement released after the meeting concluded. "Oil prices have witnessed a dramatic collapse - unprecedented in speed and magnitude."

The decision was made in an emergency meeting held in Vienna, Austria, on Friday. The meeting was originally scheduled for Nov. 18, but it was pushed up a month as slowing demand sent crude oil prices down 56% since they rose to a record high of $147.27 a barrel in mid-July. Free-falling prices have alarmed many of the nations whose economies depend on oil exports.

OPEC and demand: Many investors anticipated a larger production cut from OPEC to deal with falling demand in the slowing economy.

"Demand destruction is at over 2 million barrels a day," said Robert Laughlin, senior broker at MF Global. "What OPEC did today was a good gesture, but it wasn't enough."

OPEC president Chakib Khelil told reporters last weekend that any production cut could be "substantial," adding that the organization would try to stabilize prices between $70 and $90 a barrel.

Iran ended up cutting its production by nearly 200,000 barrels a day. Saudi Arabia, the cartel's largest supplier of oil, cut by nearly a half a million barrels.

Though OPEC said it will revisit the cuts in its next meeting on Dec. 17, analysts believe it will be hard to convince the oil producing nations to further slash production.

"The Saudis took a third of the cut off the books," Laughlin said. "But the Saudi minister made pretty clear that this is the cut, and they're not going to get another one in December."

Second cut?: But if the cut wasn't enough to restore the market to equilibrium, Laughlin said we're headed towards oil at $50 a barrel. If oil sinks below $50, he said OPEC will be forced to act and cut production again.

In its statement, the cartel seemed to anticipate continued demand destruction and falling prices through the winter months.

"This slowdown in oil demand is serving to exacerbate the situation in a market which has been over-supplied with crude for some time," the statement said. "Moreover, forecasts indicate that the fall in demand will deepen, despite the approach of winter in the northern hemisphere."

"They'll probably have to cut (production) in December," said Beutel of Cameron Hanover. "It doesn't look like they've cut enough to bolster prices."

Gasoline: The fall in world oil prices since July has pushed gasoline in the United States, the world's largest oil consumer, from a high of $4.114 a gallon on average to $2.781 a gallon Friday, according to motorist group AAA.

A report from the Department of Transportation also showed that Americans reduced the number of miles they drive by 5.6%, or 15 billion miles, during the month of August compared to the same month last year. That was the largest monthly drop in miles traveled since the department began reporting data in 1942.

According to the U.S. Department of Energy, gasoline consumption for the past four weeks averaged 8.8 million barrels a day, or 4.3% lower than the same period last year.

Oil prices settled up $1.09 to $67.84 a barrel Thursday in anticipation of OPEC's production cuts.