Average price of regular unleaded gas falls to $1.616 a gallon, matching a level not seen since January 2004. 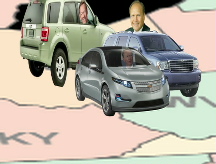 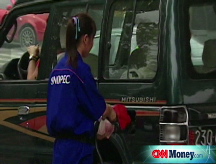 Regular unleaded gas fell for the 11th consecutive day Tuesday to an average of $1.616 a gallon, down 3 tenths of a cent from the previous day's price of $1.619, according to motorist group AAA. That's the lowest price since gas hit $1.6027 a gallon in January 2004.

Prices are down nearly $2.50, or more than 60%, since hitting a record average high of $4.114 a gallon this July. Prices have plummeted along with the price of crude oil, the main ingredient in gas, as the current economic has crisis intensified and threatened demand for petroleum-based fuels. Oil has shed more than $100 a barrel since July.

In the United States, the world's largest oil consumer, people drove 100 billion fewer miles during the 12-month period between November 2007 and October 2008 compared with the prior year, according to the U.S. Department of Transportation.

Out of major U.S. cities, Anchorage, Alaska, has the highest average gas prices, at $2.382 a gallon, according to GasBuddy.com, a service that lets motorists post local fuel prices online. Kansas City, Mo. has the lowest average, at $1.357.

Diesel: The price of diesel fuel, which is used in most trucks and commercial vehicles, fell to $2.431 on average Tuesday.

Ethanol: The price of E85, an 85% ethanol blend made primarily from corn, fell by 1.2 cents to an average of $1.475 a gallon in Tuesday's survey, according to AAA. E85 can be used in place of regular gas in specially configured "flex-fuel" vehicles, but it is not readily available in some states.

The AAA figures are state-wide averages based on credit card swipes at up to 100,000 service stations across the nation. GasBuddy prices are averages of local regular unleaded gasoline prices that about 700,000 volunteer gas prices spotters have posted online. Individual drivers may see lower fuel prices in different areas of each state.

With gas falling, trucks come back