A tenuous lifeline for seniors

States are cutting services. A Rhode Island senior center that keeps Eva Gomez connected might close - 'I'd feel sad because I'd have to stay home all day.' 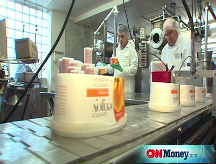 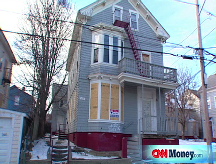 PROVIDENCE, R.I. (CNNMoney.com) -- Every weekday, Eva Gomez walks down the block to the Fox Point Senior Center to eat her one hot daily meal, exercise and chat with friends. Otherwise, she's cooped up in her Providence, R.I., apartment with little more than crackers and a cup of coffee or tea.

Gomez, however, may soon lose her vital lifeline. Fox Point may close as early as April after seeing its government funding slashed this year.

"I'd feel sad because I'd have to stay home all day," Gomez, 75, said in Portuguese, speaking through a translator. "It would be bad for my health. When I come over here, I spend the day with friends."

Senior citizens all over Rhode Island are feeling the effects of the state budget crunch. They are finding fewer activities and counselors at their local senior centers, which are struggling to cope with a 50% cut in state funding. And they are digging deep to come up $2 each way for formerly-free bus trips to the doctor appointments and to the centers for meals.

The Ocean State is far from the only state cutting back. At least 45 states are projecting budget shortfalls for this year or next, and most are slashing services of all kinds, according to the Center on Budget and Policy Priorities. Sales taxes and personal and business income taxes are falling as unemployment grows, shopping slows and corporate profits shrink.

Rhode Island has had to cut its spending to balance its $6.9 billion budget for fiscal year 2009, which started July 1. It imposed harsh cuts to a wide swath of services, including a 66% reduction in state funding for the Head Start early education program, the elimination of health coverage for 1,000 low-income parents and $2.6 million reduction in the state's college scholarship program.

The funding cuts and new bus fares will save the state nearly $1.5 million a year, according to the state Department of Elderly Affairs, which suffered a 7.5% cut for fiscal 2009.

More pain may be on the way. Rhode Island projects a yawning $350 million deficit for the remainder of the year. Gov. Donald Carcieri has proposed slicing state aid to municipalities by 6%. This, in turn, may result in less local funding for social services, such as senior centers.

At the senior centers in Rhode Island, directors are scrambling to maintain services in the face of funding cuts.

Some centers are letting go of staff or combining positions, leading to longer waits for assistance and fewer home visits to check on health and safety. Others are reducing hours or eliminating activities, such as the exercise classes they say are vital to keeping the elderly active and out of nursing homes. And a few are using their own vans to transport members, even though this cuts into the time they can spend helping the elderly with grocery shopping and other errands.

"We're all trying to do more with less," said Kathleen Carland, head of the Rhode Island Senior Center Directors Association.

The cuts were not easy to make, but had to be done to maintain other critical services, such as adult day care and home care, said Corinne Calise Russo, director of the state Department of Elderly Affairs. No seniors will be left without meals or assistance, she said, though they may have to go to other facilities or directly to the state.

"There was no other place to go for this funding," said Russo. "There were no other options."

Some centers, however, may not survive the cuts. Providence's Fox Point, which Gomez attends, may have to shut its doors by April after losing $15,000 in state funding and a nearly $30,000 federal grant. Its annual budget is only $62,000 and it has been desperately trying to replace the lost funding with donations.

With 100 members, the center provides hot lunches every weekday, as well as exercise classes and social services. Seniors turn to the center's staff to help them fill out forms for food stamps, property tax relief, telephone service discounts and the like, said Lori Silvia, Fox Point's executive director. Even more importantly, having the center gives the elderly a reason to get out of bed.

"People become isolated when they don't have services like this," Silvia said. "They just sit in their apartments. We don't want to see that happen."

Two dollars may not seem like much money, but it's enough to prevent Frances Podolski from going to her local senior center for a hot meal and some company.

On her fixed income, the Pawtucket resident can't afford the $2 fee. Without that thrice-weekly visit, Podolski gets depressed. She had to cut back to once or twice a week, until a small grant from a bank allowed the center to temporarily cover her fares.

"I'm sick of talking to the four walls," said Podolski, 84. "You have to be alone to understand what it means to be alone. You stay home and you go crazy."

A third of centers surveyed recently by the Senior Agenda Coalition said fewer seniors are participating in their meal programs because of the copay. At Podolski's center, the Leon Mathieu Senior Center, attendance at lunch dropped by about 15% to 20%, said Director Mary Lou Moran.

Many elderly also depend on the bus to take them to medical appointments.

Savino Salerno of Pawtucket relies on the bus to bring him to the Veterans Administration Hospital two or three times a month. The added $12 cuts into his budget, already stressed from the rising costs of health care and maintaining his home.

"I have to watch my pennies and be very frugal," said Salerno, 89, who relies on Social Security, a small pension and monthly payments from a reverse mortgage. "I used to go to the picture shows. I will have to cut down on that."

Bailing out the states: How it will work
Features
2011 Fortune 500