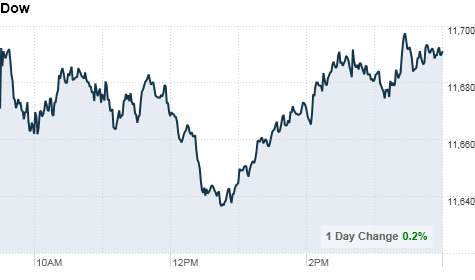 Stocks struggled for direction all day. After losing as much as 0.3% mid-day, the Dow Jones industrial average (INDU) ended the session up 20 points, closing at a fresh two-year high of 11,691.

Throughout the day, investors weighed a better-than-expected factory orders report with concerns that stocks may be overextended, after posting double-digit percentage gains in 2010.

"We've had such a run here in the last four weeks, without any downside relief," said Rich Ilczyszyn, a market strategist with futures-broker Lind Waldock. "It's a normal market reaction, as we go up for a month or so and then we pull back."

Stocks ended 2010 with their best December since 1991, and some traders think they may have gotten a bit ahead of themselves. As a result, stocks were held back Tuesday as some investors tried to reap the rewards of their 2010 bets now -- in case the market falls back in January.

Traders also mulled over the minutes from the Federal Reserve's latest meeting in December, which showed that the central bank's policymakers remain committed to the purchase of $600 billion in U.S. Treasurys as a means of stimulating the economy.

Anticipation of that stimulus policy, referred to as "quantitative easing" or "QE2," had fueled bullish stock market gains in the second half of 2010. Investors had grown concerned about whether the Fed will follow through with the full $600 billion program in 2011.

The minutes alleviated some of those fears.

"Takeaway number one is they're not going to stop QE2 right now," said Doug Roberts, chief investment strategist at Channel Capital Research. "And it looks like from this, they're not as hesitant about QE3 as one might think."

Stocks are coming off a rally on Monday, when the Dow closed at a fresh two-year high.

Economy: After the opening bell, the Commerce Department reported that November factory orders rose 0.7% in November, following a 0.7% decrease in October. Analysts surveyed by Briefing.com had expected total orders to fall by 0.3% during the month.

Investors also watched as major auto companies release their December sales figures throughout the day. General Motors was the first to report Tuesday morning, saying it ended a challenging 2010 with a bang.

Ford Motor (F, Fortune 500) shares rose 0.8% after the company reported December sales were up 4% from a year ago.

Analysts surveyed by Briefing.com had expected overall auto sales for December to drop to 3.7 million, from 3.8 million the previous month. The fact that most automakers reported a strong sales month raised hopes for the industry heading into the new year.

Reports on jobless claims, job cuts and manufacturing are on tap later in the week, and the government's closely-watched jobs report is due Friday.

Currencies and commodities: The dollar lost ground against the the British pound, but gained versus the Japanese yen and the euro.

Commodities: The bull that won't die - The Buzz

Gold futures for February delivery pulled back from the previous session's highs, slipping $44.10 to settle at $1,378.80 an ounce.

Dollar could face wild ride in 2011