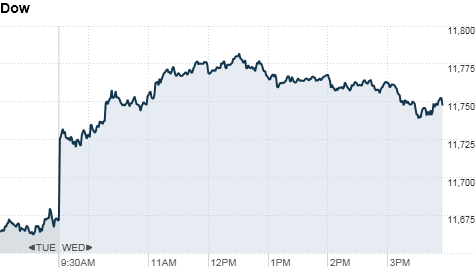 Bank shares also got a lift Wednesday from Wells Fargo's upgraded outlook for the sector. "It's a group that lagged pretty badly in the fall, and they're still playing catch-up," said Timothy Ghriskey, CIO at Solaris Asset Management.

Europe continues to be a wild card as 2011 gets underway, so investors are looking for any signs that those issues are under control.

How U.S., Portugal are alike

A rally in overseas markets spilled over to U.S. stocks early in the session as a solid auction of Portuguese bonds helped ease eurozone jitters.

"The bond offering went relatively decently for Portugal [and] that relieved the fears about a bailout." said John Wilson, Chief technical strategist at Morgan Keegan.

World markets: European stocks rose after Portugal's successful auction of government debt. The auction came amid recent speculation that Portugal might be the next eurozone country to need a bailout.

"They sold $1.249 billion at the auction, so basically money is costly but they are selling it, so that's a relief for the market," said Peter Cardillo, chief market economist at Avalon Partners.. "Tomorrow is Spain's turn, and that auction shouldn't be a problem either, so the market is going to be moving higher on that as well."

The yuan problem isn't going away - The Buzz

Meanwhile, Bank of China is allowing customers in the United States to trade its currency, the yuan, for the first time.

Economy: Treasury Secretary Timothy Geithner said China's policies are a growing source of concern in the United States and other countries. In a speech at Johns Hopkins, Geithner also said that China's undervalued currency and dependence on exports must be addressed. His remarks come ahead of next week's U.S. visit by Chinese President Hu Jintao.

The Federal Reserve released its snapshot of economic activity for January Wednesday afternoon.

Known as the Beige Book, the report showed that the economy continued to grow moderately across the nation. Despite the lagging housing market, the Fed reported bright spots in manufacturing, retail, and non financial services sectors.

The December Treasury budget was also released Wednesday afternoon. The budget shortfall eased to $80 billion in December from $91.4 billion in the previous month.

Companies: AIG (AIG, Fortune 500) announced Wednesday that it has agreed to sell its Taiwan unit, Nan Shan Life Insurance Company, for $2.16 billion in cash. Shares of the insurer closed down 1.1%.

Shares of ITT (ITT, Fortune 500) ended the day up 16% after the manufacturing company announced plans to split into three publicly traded companies by spinning off its water-related businesses and defense division.

Currencies and commodities: The dollar lost ground against the euro and the British pound, but gained slightly against the Japanese yen.

Corn futures rose 3% Wednesday after the U.S. Department of Agriculture predicted corn supplies would fall to their lowest level since 1996.

The report is the latest sign of stretched food supplies at a time when growth in developing countries is fueling seemingly insatiable demand for agricultural goods.

Get ready for (slightly) fatter paychecks