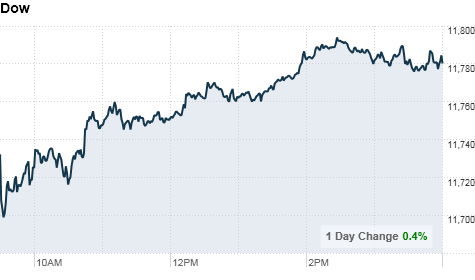 The Dow and the S&P posted their seventh straight week of gains. That's the longest streak for the Dow since the two months of consecutive gains that ended in April 2010.

Stocks are overbought right now and the market is due for a correction, Springer said. But rather than moving sharply lower, the market is "resting" by merely moving sideways.

Those daily pullbacks are actually good signs that the market is keeping itself in check. Stocks ended lower Thursday in a quiet session.

Companies: Before the opening bell, JPMorgan Chase reported a 47% jump in fourth-quarter earnings to $4.8 billion, or $1.12 per share, beating the 99 cents forecast by analysts.

But the investment bank also bolstered its reserves for mortgage-related legal expenses for the second straight quarter. The stock closed 1% higher.

Aging bull: Can stocks go much higher? - The Buzz

Economy: Before the opening bell, the government reported that both inflation and retail sales rose last month.

The Commerce Department's Consumer Price Index, a key measure of consumer inflation, rose 0.5% in December after inching up 0.1% in the previous month.

Core CPI edged up 0.1% after rising the same amount in November. The increase was in line with estimates.

Separately, the Commerce Department said retail sales increased 0.6% in December, following a rise of 0.8% in November. Sales were expected to have gained 0.7%. Sales excluding autos rose 0.4%, after jumping 1.2% in the previous month. That missed the 0.6% gain economists had forecast.

The Federal Reserve said industrial production rose 0.8% in December. Capacity utilization rose to 76% in December from 75.4% the previous month.

Currencies and commodities: The dollar fell against the British pound but rose versus the euro and the Japanese yen.

The scoop on indexing